Wood of Anna Perenna at Park of Music 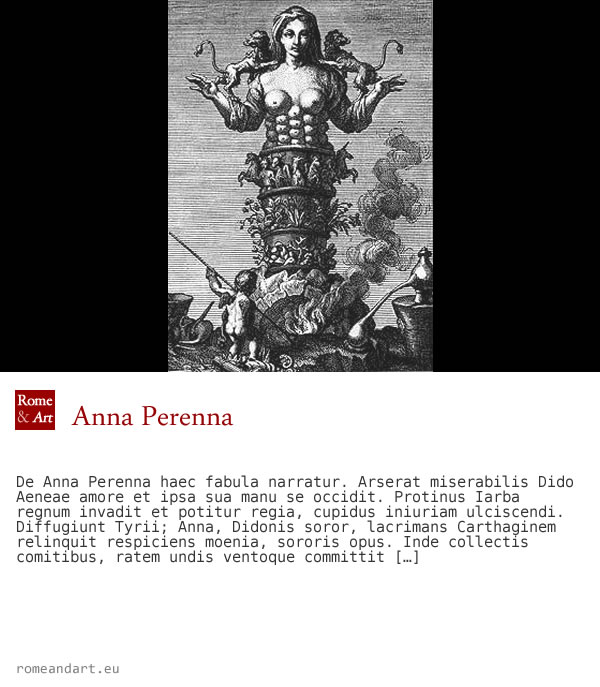 From early Republican era at the first mile of the Via Flaminia was the wood consecrated to Anna Perenna. Outside the Flaminia gate there were large farms and then springs of clear water and valleys and woods; these woods were not very frequented habitually and often there were going on mysterious rituals also . Here was the wood of Anna Perenna, the goddess of nature and the renewal of the seasons.
At Ides of March, the people of Rome went to the wood of Anna Perenna to celebrate the new beginning of the cycle of seasons, the arrival of spring. The festival was celebrated on March 15 that until the beginning of the empire coincided with the New Year. The people poured into the meadows and woods, tents were planted, shelters were made with branches and twigs, they danced, took the sun, made love and, above all, they drank without restraint, because and hope many years how many are the cups that gulp down . (Ovid, Fasti).
During the feast it was possible to do everything that in the city was considered inappropriate or forbidden: the women could dance with their hair loose, the men could play actors without fear of losing their status and above all they made love behind the hedges in complete freedom; an irresistible feast in which everyone participated, so much so that this date was chosen to kill Caesar just because Rome was deserted.
The etymological meaning of the name refers to the abundance of nourishment - Anna means food and Perenna means full, complete -, of the fruits of the earth that grow copious with good time. Anna Perenna for the ancient Romans was also the manifestation of the Full Moon and by extension of the lunar cycles and the passing of the seasons, it was ultimately the one that feeds. . Over time the ancestral significance of Anna Perenna seems to have been forgotten and so for the Roman people she had become a goddess who nourished and took care of the entire cycle of the year with the etymology of "annus". During her feast you wished each other of annare perannareque commode, to spend a good year until the end.
Over the centuries the sphere of the goddess's prerogatives changed: from the Goddess of abundance and the time passing to an ambiguous and mysterious Nympha that puts us in touch with the hereafter and with the Infernal gods. In this evolution of Anna Perenna cult may have also influenced the myths that were built by historians and poets as the one that identifies Anna Perenna with Anna, sister of Dido, who flees from Carthage when the Numidis occupy it and falls on the coasts of Latium and there she is welcomed by Aeneas.
According to the myth Enea hosted Anna, but Lavinia was jealous and did not want her with them. In the night Dido appeared in dream to her sister and warned her to the danger that she was in; Anna left the house of Aeneas but on the way out she slipped into the waters of the Numicus River and drowned. When Enea arrived with his men, he tried to save her but Anna had become a waters nymph and lived in the perennial flow of the river Numicus. The river Numicus today has the less fascinating name of “Fosso di Pratica di Mare” and is a small river that descends from Monte Albano, passes through Lavinio and flows into the Tyrrhenian Sea ...