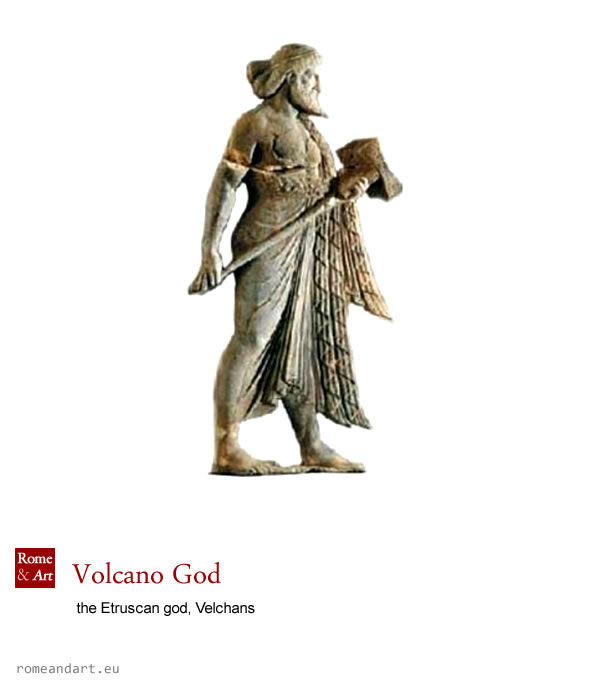 The first buildings In the Forum valley were the temples dedicated to the archaic deities; the oldest temple is the Volcanal, an altar erected in honor of the God Volcan nearby Comitum.
The God Vulcan was originally an Etruscan God, known by the name of Velchans, and to whom were connected all the manifestations to the fire related as volcanoes, sulphates and lightning and that had to be honored dedicating temples and sacrifices to him.
The legendary history of Rome says that when, after the rat episode of the Sabines, the clash between the Romans and Sabines ended with the merger of the two peoples, the sabine king Titus Tatius wanted to build an altar dedicated to god Vulcan right in where it took place the battle. At this altar then it was built a shrine where it met the council of curial fathers and the Comitium, a large open area where they held meetings of the tribes of the two peoples, was built near .
The sanctuary was a large area on which stood the altar and was called Area Volcani and being an embankment that overlooked the Comitium of almost 5 meters, hence the rulers, the kings before and the consuls later, they spoke to the representatives of the people gathered in the Comitium. In this area they were elevated honorary monuments like the bronze chariot that Romulus put there to celebrate his victory over Caninens, a statue of Romulus with a laurel crown and the statue that the Senate wanted to erect to Horatius Codes, the hero which alone opposed the Etruscan king Porsenna soldiers on the Sublicio Bridge, giving to the Romans time to cut it and thus save Rome.
The strangeness of Vulcan to the archaic Roman religion is reiterated from the site where it was built: outside the city walls of that Romulus had traced the limits and it took another two centuries for the altars dedicated to Vulcan were included within the city. The sources, however, they also give information that seem discordant; according to Plutarch they were built two altars dedicated to the god Vulcan, one by Titus Tatius that was located near the city (the one near the Comitium) and another by Romulus who erected outside his Rome Square, along the slope of Palatium and opposite to the Velia whose identification is not yet certain. The sanctuary of the God Vulcan must necessarily be outside the city because, as Pliny also recounts, during the days dedicated to him, spontaneous fires could come out of the earth.
Just as Vesta represented the "good fire", that of the domestic hearth, Vulcan represented the "destructive fire" which in the evolution of the cult was exorcised making it become the fire of war; first Volcanus had the function of receiving and destroying the weapons of the enemies, and later, after the meeting with the Greek culture, he acquired some of the functions of Hephaestus, the Greek god of fire, and he will use fire to forge weapons.
The Volcanal, the one near the Comitium, where the archaic god was honored, was born then as a place of peace between Romans and Sabines, between Romulus and Titus Tatius so that became a symbol of harmony and it was for this reason that Furius Camillus will build the first Temple of Concord just next to the altar of Vulcan in 367 BC ...