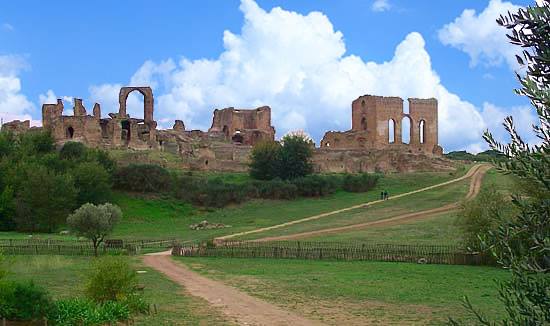 The brothers Sextus Quintilius Condianus and Sextus Quintilius Valerius Maximus, belonging to an important senatorial family, very rich and highly educated, when they had to choose the area where to build their suburban villa, wanted the site at 5th mile of the Appian Way, to represent them and their origins. The Quintilii descended from the Quintii (Coarelli), an important family of Albalonga who became part of the Roman patrician class when their original city was destroyed; They then chose the area of the Fossae Cluilae where the three Curiatii, the hero brothers of Albalonga, had set up their camp for the duel with the Horatii, the champion brothers of Rome.
Where the duel took place and the brothers died, their funerary monuments had been erected and so the Quintiles chose to place the entry to their suburban villa just after the two burial moundes of the Curiatii and the Horatii.
The villa or rather the set of buildings that made up the villa was built on a very large area, second only to Villa Adriana, it is believed that it exceeded 100 hectares - the area acquired by the Italian state while representing a part of it, extends for 24 hectares -.
The two brothers were very rich because they had had a brilliant career at the time of Marcus Aurelius who first entrusted him with the governorship of Achaia (Greece) and then of Pannonia (Hungary) where they repelled an invasion of the Germans; in 151 A.D. they were both elected consuls. Despite being engaged as senators, they preferred to live in their suburban villa which, being on the Appian Way, allowed them to reach the heart of the city in a short time.
The area occupied by the villa was a succession of gentle slopes starting from Via Appia Antica to probably the road leading to Tusculum. The Quintiles made the mistake of building perhaps the most beautiful suburban villa in Rome, so much so that it aroused the wishes of Commodus who wanted it at any cost; to take it away from the two brothers he resorted to the most vile way and accused them of having conspired against him.
In 180 Commodus managed to foil a conspiracy against him organized by Claudius Ummidius Quadratus, who was also his cousin, and who had been supported by a part of the senators were dissatisfied with Commodus political decisions; Ummidius's mistake was to entrust the murder of Commodus to Quintiano a young senator who announced his gesture before carrying it out, giving the emperor the possibility of defending himself, at least this is what reports Cassio Dio who was a direct witness of the facts.
Commodus's revenge was rapid and generalized and Cassius Dio provided the list of senators who were accused and executed, rightly or wrongly, including Salvus Julianus, the same secretary ab epistulis Vetruvius Secondus, Claudius Pompeyanus Quintianus father of the hitter and father-in-law of his sister Lucilla and all the members of the Quintiles whose only fault was being senators and therefore had certainly had an inkling of the conspiracy.
Not only the two brothers Sextus Quintilius Valerius Maximus and Sextus Quintilius Condianus but also their children were executed by strangulation and, of the first two who had been consuls, the damnatio memoriae was also decreed so that all their assets were confiscated. The villa on the Appia thus became part of the state property.
Commodus, having taken possession of the villa along the Via Appia, enriched it with buildings and enlarged it until it became the largest and richest villa in the suburb, much larger than the 24 hectares that the Municipality of Rome bought in 1984.
The emperor particularly loved the thermal baths of the villa but he also left the imprint of his mania for fighting in the arena by having a curvilinear building with an elliptical plan built at the foot of the calidarium and called "Maritime Theater", similar to that one of villa Adriana; with the latest excavations and from the stamps on the bricks it was discovered that it was an arena for training and perhaps for Commodus' fights in front of a chosen audience.
The Villa was also the setting for one of the black moments in Commodus reign: in the year 190 in Rome there was a shortage of wheat due to a restrictive policy of distributions to people as a result of some decisions of the Prefect of the Praetorium Cleander, a Commodus freedman to whom the emperor had granted very wide powers ...