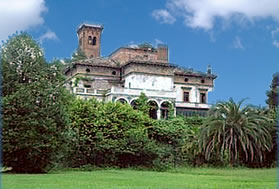 The name was given to the villa by his famous host, the "almost" queen of Italy Rosa Cervellana. Built in 1874 to be the Roman residence of the Countess of Mirafiori and Fontanafredda, more known as "the beautiful Rosina", the morganatic wife of the first king of Italy Vittorio Emanuele II, it is in the Nomentana Road near the park of Villa Torlonia. The King purchased it in 1874 in order to made coming to Rome Rosa Vercellana, who had married in 1868 with morgantic weddings (that mean without communion of properties and recognition of nobles titles) and their two children.

The building was a villa in neo-Renaissance style of three plans with an entry lodge and two lateral wings lightly advanced respect to the lodge; of eclectic form it is the bell-tower on the right side, placed attached by a low construction with loggia that was serving as connection to a little chapel.
The villa was decorated by many stuccoes, glass doors and frescoes, as the parrots room (there is located just over the entrance), on the tower there had installed a watch twin of that one of Montecitorio.

The great park had been arranged by the gardener of the Savoia royal family, Emilio Richter, according to the English taste and was understanding: two lakes, the organisation of an aviary coming from the gardens of the Quirinale and a greenhouse that was containing rare plants. Today of the park there remain some short runs identifiable by the cliffs and by the trees of cedar that manage to return the vision of the original park, drastically reduced in 1910 by the widening of the Nomentana street.
Regal hosts - Vittorio Emanuele II had known Rosa Vercellana in 1847: he was the 27 years old hereditary prince and she was the beautiful fourteen years old daughter of the commander officer of the military garrison of the Castle of Racconigi. After married Vittorio Emanuele, should have held secret the relation more why in the Reign of Sardinia there was in force a law that was punishing the "kidnapping" of girls younger than 16 years, that to hide his continuous unfaithfulnesses to the wife Princess Mary Adelaide.

Rose became "Beautiful Rosina" for the whole people who was identifying her with the "Bella Gigogin" (beautifull Gigogin) of a famous song of the time; she always followed the king who, after having been remained a widower, appointed her as Countess of Mirafiori and Fontanafredda. When the capital was to Florence she lived in the villa "La Petraia" until the King purchased in Rome for her the beautiful villa with park in Nomentana Road; in 1878 to the king death, Rosa Vercellana left Villa Mirafiori and went to Pisa for living with the daughter.
Villa Mirafiori has done at background to two beautiful films set in eighthundred period, "the innocent" of Luchino Visconti and "Beyond the good and the evil" of Liliana Cavani.
At present the villa is seat of the Department of Philosophy of the University of Rome "La Sapienza".