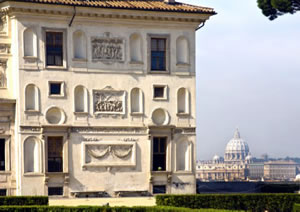 Along the avenue from Place Trinita dei Monti leads to the Pincio is the entrance of one of the most beautiful Renaissance villas of Rome: Villa Medici. The view enjoyed from its gardens is unique, but that they knew the ancient Romans who their urban villas had built there.
Plutarch told that Lucius Licinius Lucullus "preferred to abandon public affairs because they were out of control and corrupt, or, as someone claimed, because he had reached the top of glory and felt entitled to lie down in a life of ease and luxury". On the hill overlooking the Campus Martius, the rich Lucullus built a beautiful urban villa, known as the Horti Luculliani, that the ancients considered one of the dwellings of the gods.
The building and the horti occupied the hillside with a series of terraces, linked by monumental stairs. The upper terrace was reached by a flight of steps to cross two flights and was decorated with an exedra big, beautiful and semicircular, topped by a circular building like a temple, where now is the belvedere of Villa Medici.

Lucullus Villa was so beautiful that Messalina fell in love with it and,to get it, she did condemn and kill the new owner. But the villa did not bring good luck to her: Messalina, just twenty years old, was killed in the horti by order of her husband, the emperor Claudius.
The villa was a good Imperial until the IV century when was sold to private individuals and, in fact, began owners gens Pincia - hence the name by which it’s known today the area -; it seem the emperor Honorius have stayed there in 403-404 when he came to Rome to celebrate his triumph over the Visigoths and even the general Belisario.

After the sixth century. the villa fell into disrepair and in fact in 1564 the Cardinal Ricci of Montepulciano bought it that it was only a vineyard with a small building used for summer holidays, so did some works to transform the hoot in a residence and among other artists there appears to have cooperated even Michelangelo. The nephews of Cardinal, when they inherited the villa, renewed and embellished by opening a monumental entrance on via di Porta Pinciana and building the ascent of salita di S. Sebastianello after buying two vineyards neighbouring.
In 1576 the property was purchased by Cardinal Ferdinando de Medici, who entrusted the works to Bartolomeo Ammannati; in the villa, the young Cardinal began collecting masterpieces of Roman art that he bought from the excavations for the factories in the Campus Martius to which were added the statues and bas-reliefs that emerged during the extension works ofin his property. The most important pieces were placed in an Antiquarium, but others were set in front of the villa, while the ruins were simply covered with soil as the Temple dedicated to the Fortune which is located in the garden area placed like "silva" on the north side towards the Aurelian walls, or placed like garden decor such as the group of “Niobidi” - probably part of the pediment of the temple of Apollo Sosiano in the Forum Boario -. In this exhibition were part, probably, the statues today at “Loggia dei Lanzi” in Florence, Venus de’ Medici and the Attic krater in Uffizi.was Ferdinando de 'Medici when he had to return to Florence to become Grand Duke of Tuscany, who brought with him many of the works of art that were kept. The house passed to his nephew Alessandro de 'Medici, who was also a cardinal, and who became Pope Leone XI ...