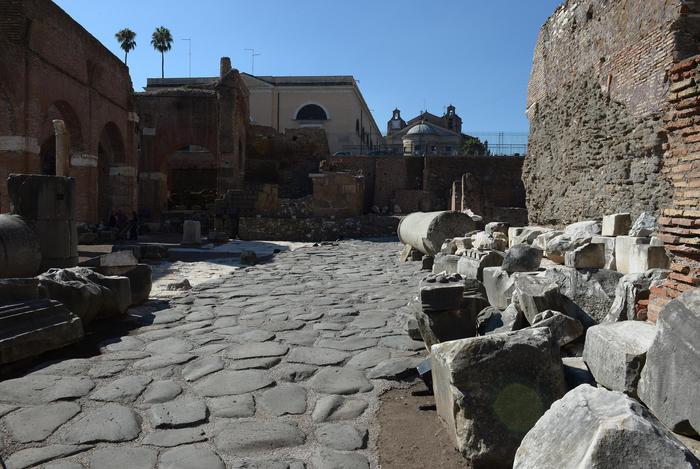 Vicus Jugarius is the oldest street in Rome, in fact even before the age of kings was the route along passed through the people who were going to the market area at the ford on the river Tiber.
When Servio Tullio built the walls of Rome he had to leave a gap as not to interrupt the road; for this reason it was to build the Porta Carmentale that had two arches to allow the passage of the great flow of people that every day traveled the Vicus Jugarius.
In the early republican period its course was much longer than in the imperial age; at the beginning it was a real traffic director coming up to Quirinal Hill where it met the roads coming from the Sabine territory, from Gabii, and from Praeneste and used by the merchants for their traffic to and from the inside.
As for the origin of the name, the literal translation of road of the builders of yokes does not seem satisfactory. The explanation of Festus Avienus is different, according to him the road took its name from an altar that stood along its path and was dedicated to Juno, in this case the etymology derives from Jugaliis which means "to unite" as Juno presided over the bonds marital.
Vicus Jugarius early as the 6th century BC began at the intersection of the two arms of Via Sacra where the Temple of Saturn is located and over time it has been growing in height due to the overlapping of the cobblestone even if it has substantially maintained the original route. During the first century B.C. assumed a monumental aspect for the construction of the Basilica Julia and the tabernae connected to this and of the building resting on the back wall of the Temple of Saturn.
The importance of the Vicus was also highlighted with erection in 16 AD the Arch of Tiberius that celebrated the victories of Germanicus over Germans; it had only one fornix that crossed the street at the corner of the Forum and the wall of support for the Temple of Saturn; the arch was still standing at the time of Constantine as it was represented in the panel of the adlocutio in the bas-relief of his arch.
Vicus underwent a great change after the fire 80 A.D. which destroyed much of the construction between the Campus Martius and the Palatine; Domitian took advantage of this to restore monuments but also to move others with the aim of erasing more ancient senatorial symbols in favor of imperial symbols.
Just along the Vicus Jugarius Domitian built two important buildings: the Temple of Dei Consenti and a building behind the Basilica Julia which is referred as Post Templum Divi Augusti in Minervam, probably a porch destined for posting the originals of military diplomas.
Recent archeological excavations have uncovered as it existed on the side of the Basilica Julia toward the Vicus Jugarius, between II and III tavern, the stairs that allowed to reach a top level covered by porch with vaulted ceilings from which the public could attend processes that took place inside the Basilica, but that was also a "shortcut" to reach the Vicus Tuscus and the Velabro area ...