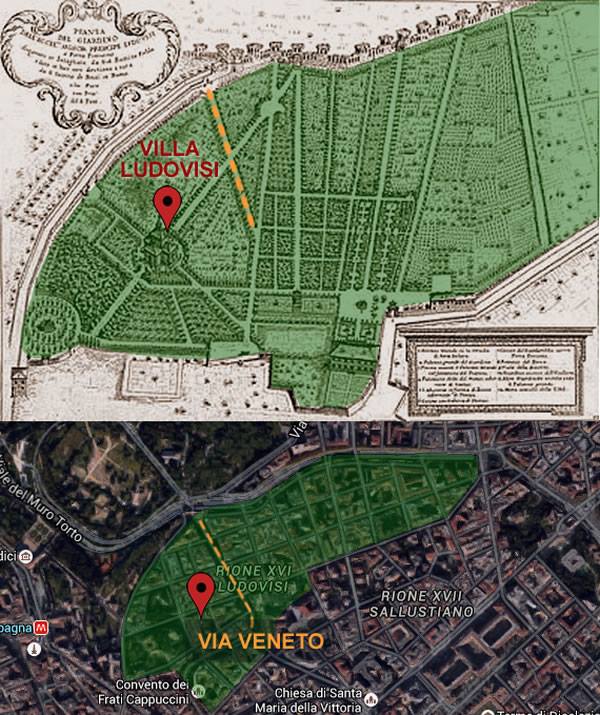 When Villa Ludovisi was sold and subdivided, the streets of the new Ludovisi district coincided largely with the avenues that the great architect of gardens, Le Notre had designed in 1621; the avenue that went down from Porta Pinciana until the Palace where Queen Margherita lived, was going to become one of the most famous metropolitan streets in the world: Via Veneto.
The project of the new Ludovisi district included some wide streets, also suitable for the new mobility. Via Veneto was born as "Passeggiata Umbertina" in 1894 and connects Piazza Barberini with Porta Pinciana, as the main street of most luxurious district of Rome which became the capital of Italy; there are built elegant villas and noble palaces, trendy cafés and restaurants for the upper middle class and the aristocracy, here also foreign companies come to invest in the construction of large first-class hotels.
The large hotels favored the movement of travelers from the historic “quartier des etrangers” between Piazza del Popolo and Piazza di Spagna; in addition, from the early twentieth century another factor influenced the choice of new hotels: the use of cars for which the width of the streets of the new district was as necessary as ever.
Along the new road, but in a roundabout way too, large hotels were built that ones were missing in Rome; in 1906 Baron Von Pfyffer, also owner of the Grand Hotel, inaugurated the first luxury hotel on Via Veneto, the Excelsior.
We have to wait until 1926 for the construction of another hotel that represents the rationalist response of the architect Marcello Piacentini to the baroque lines of the Excelsior: the Palace. The name was chosen by the architect to reconnect, in a modern key, to the palaces of the embassies of Baroque Rome. Inside the Hotel Palace there are frescoes by the venetian artist Guido Cadorin; curious is the fountain for dogs, made in the facade of the Hotel.
The fame that Via Veneto has gained over time is not only linked to the large and luxurious hotels that were built there, but also to its bars, restaurants and nightclubs. A curiosity: the first nightclub on Via Veneto was opened in the early fifties in the premises rented by the Padri Maroniti at the corner of Via di Porta Pinciana and Via dell'Aurora; it was frequented by the American billionaires who stayed in the big hotels, the Excelsior, the Palace, the Flora, the Regina Carlton.
And then there were the cafes; in the "noble" part, a sort of Rive Gauche of Via Veneto, there was the Caffè Doney, frequented by well-known intellectuals and professionals; a little further on towards Porta Pinciana at 173 Via Veneto there was the Caffè Strega.
It was the usual meeting place for artists and intellectuals and the "office" of the poet Vincenzo Cardarelli, legendary director of the weekly newspaper La Fiera Letteraria; among those tables where the names of Italian literary effervescence sat in the fifties, the idea of the most important Italian literary prize, the "Strega Prize ", was born, financed by the owner of the well-known liqueur and also of the Cafè from which the award took its name. The first edition in 1947 was won by Flaiano with "Tempo di Uccidere", but the second Cardarelli with "Villa Tarantola". But Italian cinema also owes its tribute to Caffè Strega; Federico Fellini spoke here of his films "Eight and a half" and of the "Dolce vita" before the movie became the manifesto of Via Veneto in the world.