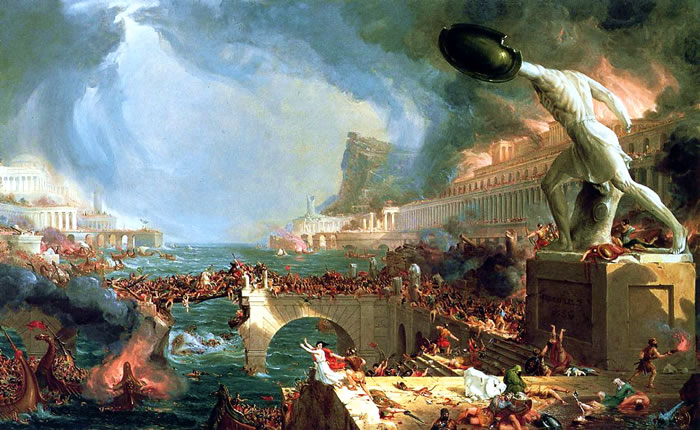 There are events in the life of a city that mark so deeply that staying even verbal warning in the language of its inhabitants; even today in Rome in order to alert of an impending catastrophe they say "Here come the Vandals" and to sanction unacceptable behaviors you say "You're a vandal".
In 455 the terror came from the sea: Genseric with his Vandals sailed from Carthage and came on Latium coast sailed up the Tiber and fell on Rome. There was a peace treaty was signed in 442 but who represented Rome had been assassinated, the general Flavius Aetius, by Valentinian III, who in turn was assassinated by Petronius Maximus who at time wanted to marry the widow under the death threat; Eudoxia to be saved had called Genseric.
Just the Genseric ships arrived ahead of Portus, Rome fell into disorder and despair; Petronius, as Gregorovius said, did not organize the defense, but he dismissed the court and the servants and fled. The nobles and the people confused and angry revolt against Petronius and having found him in the street, stoned him and than threw the body into the Tiber. Only Pope Leo I faced Genseric asking him don't destroy Rome and kill its inhabitants; the king of the Vandals, no longer feared by might of Rome, was only interested in the riches of the city and promised that he would have only sacked.
Genseric entered in Rome, installed himself in the Imperial Palace on the Palatine and for fourteen days his Vandals and the Berbers who were his army plundered the palaces and temples of Rome; chroniclers tell about wagons filled with statues, bronzes, golds and silks that continually brought the treasures to boats moored along the landing on the Tiber.
Gregorovius tells that Genseric emptied the imperial palaceentirely, came to take away half of the gilded bronze roof of the Temple of Jupit er and took all the treasures that Titus had brought to Rome from the Temple of Jerusalem, including the Menorah which has since disappeared. Procopius precise which one of the ships, full of statues, foundered but not the other, laden with booty, which arrived at the port of Carthage to beautify the residence of Genseric.
Genseric and his men in addition to priceless treasures carried away numerous hostages including Licinia Eudoxia, widow of Emperor Valentinian III and his daughter Eudocia besides the son of the Roman general Aetius, Gaudentius. Eudocia married the son of Genseric, Huneric at Carthage a few months later, while the mother and the sister of Eudocia, as the wife of the powerful Roman senator Olybrius were sent to Constantinople at the express request of the Eastern Emperor.
When Pope Leo asked and obtained by Genserico which had not burned the city, they were not massacred its inhabitants and were not plundered the churches knew that all the gold and marble and so precious was in Rome, in its buildings public and patricians and merchantsi homes would be sacked. In a few short hours until June 2nd unleashed the race to hide large and small private treasures; jewels and money was walled up inside niches in the houses, the same that are now found in archaeological excavations ...