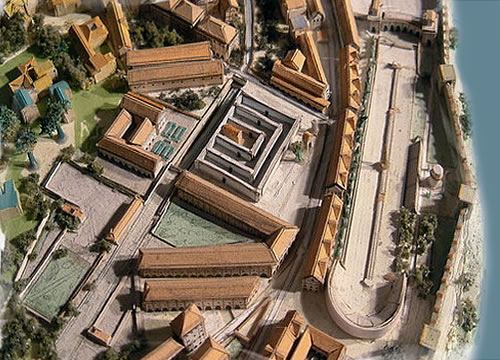 In the winter of 1867 Lanciani thought he had found the two temples of Dis and Proserpina instead he had found the Ustrinum of Hadrian, the sacred area where the emperor's body had been cremated.
In Tabula X of the Laws of the Twelve Tables of 490 BC it was written:

The law required that the tombs be placed outside the sacred enclosure of theUrbs, the Pomoeriium, but the methods of body preservation were free; in the aarchaic age both the inhumation and the cremation were used but, already starting from the first century. B.C. ,the use of cremation in the second century it became a general practice so much that burial was almost the exception. Then ustrina were established, these were sacred areas where the pyres were raised for the bodies cremation.
The Roman emperors were almost all cremated but before other great ones at their death were cremated, so it happened for Julius Caesar and also Gaius Marius had been cremated. At the end of the first century BC Augustus as Pontifex Maximus formalized rituals connected with celebrations of funus and all had to take place in the Campus Martius, the area that had been left out of the sacred precincts of Pomerium. The rite was aimed at the crematio, an act with which the divinization recognized by the Senate was realized only to the emperors who had protected, helped or increased the power of Rome.
The ustrinum, whose etymological meaning derives from urere or burning, was the sacred enclosure where the cremation ceremony not only had taken place but a mystery had come true: the emperor had risen to heaven, he had turned into god, a minor god who was called divus. The divine nature that the deceased emperor had assumed required that the place where the mystery of transformation had taken place was somehow preserved, for this reason the ustrinum were built. Ustrinum was a very special monuments that it was built only after the cremation took place.
That the construction happen long after the funeral ceremony is explained not only by the time required to build a monument of such vast size but also with the ceremony for that the emperor had to be cremated in presence of all people of Rome.
But the Hadrian funus was especially because the emperor had died in Baia where he retired a few months ago to fight the worsening of the disease from that he suffered: pleural dropsy.
The death of Hadrian took place on 10 July 138 AD in the imperial villa of Puteoli (which had been owned by Cicero) and, probably due to the condition of the body and the hot season, the cremation of the body was made just one or two days later. For this reason in Rome honors to the late emperor were bestowed with a funus imaginario, in fact the ceremonial rite provided that, without the mortal remains, the ceremony of consacratio to take place with the deposition on the pyre of a wax dummy to which they had been given the appearance of the emperor. It did not matter that the remains of the body were already in the mausoleum that the emperor had built; for the ceremony of consecration it was enough that there was an emanation of his body. Moreover, that on the pyre there was a body of which at the end of the rite there would be nothing left to furnish proof for all the people that actually the deceased emperor had been brought to Olympus. Precisely for this "advantage" that the funus imaginario gave to political propaganda, from the funus of Hadrian onwards the bodies of the emperors were no longer cremated before the people and therefore there was no longer the ossilegia ritual , or the collection of bone fragments of body from the ashes ...