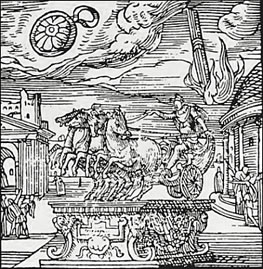 In the sky of Ancient Rome they were sighted UFOs since archaic times. Two thousand years ago the historian Livy in his Ab Urbe condita, says "... et Arpis Parmas in coelo visas pugnantemque cum luna solem ..." (… and in Arpis shields were seen in the sky and saw the sun battle with the moon ...); Parmas or parmula was a kind of round or elliptical shield used by the Roman army with the top convex reminiscent of many the most frequently recognized form in UFOs.
One might object that could be a phenomenon explained today with a law of physics, but the Romans built over the Legend of Mars shield known as ANCILE.
This shield fell from heaven and was considered a gift from Mars who had the power to protect Roma; this fact occurred when was king Numa Pompilius who was concerned to preserve the precious gift hiding among eleven perfect copies and establishing an order of 12 priests - salii palatini - who had the task of bringing in procession the 12 ancilia at every opening of 'military years that happened in the spring, while during the whole year it were kept in the underground room of the Regia.
During the whole period of the Punic Wars, between the fourth and second century BC, considered a long time with moments of serious crisis, the Romans were particularly attentive to celestial events as each event was considered an expression of the feeling of the gods to men. The Pontifex Maximus had the task to make a note in the Annales Massimi the prodigia that occurred and experts of clipeology (ancient ufology) consider them sufficiently reliable reports because they were provided for the verification procedures of the news before you record in the Annales. Besides the previous sightings of "Parmas" reported by Livy, that would happen at Arpi in 217 B.C., the year before in Rome there would be a spectacular appearance of navium shining in the sky, and again in 173 BC in the Lanuvius sky would appear a large fleet.
But those were not the only episodes of sightings of bright objects in the sky in the ancient era; Seneca in his Natural Science Treaty (Book II), lists the several observations on the unexplained appearance of "LIGHTING GIRDERS" that appeared suddenly in the skies of the city where it remained motionless for a few days and then disappear.
A truly all-embracing collection of all the unusual events, "prodigia", the amazing facts and extraordinary that in living memory were known in ancient times we have by Julius Obsequens, he was a Roman pagan writer lived in the fourth century. A.D, probably contemporary of Symmachus, true precursor of "the unusual chroniclers" of modern times; his work "Liber Prodigiorum" is dedicated to omens and strange events in Rome between the years 249 BC and 12 BC.
Among the most reported episodes there is the "miracle the two suns" that would appear in broad daylight in the Alba Fucens sky in the territory of the Marsi, in 204 B.C. ; the event was illustrated when the manuscript - which is what came up to us - was printed in 1508 in Venice by Aldus Manutius ...