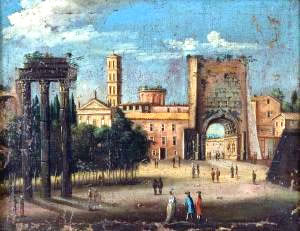 In the Middle Ages, during the struggles for power, the noble families of Rome had built fortresses by choosing sites at the top and using the existing buildings as much as possible.
The Frangipane family, perhaps a branch of the gens Anicia, was one of the most powerful in Rome and its surname derived from an ancestor, merchant by profession, who during a famine in the eighth century turned Rome distributing bread (fragnere panem = breaking bread ) to people suffering from hunger. In the twelfth century the famiy was divided into three branches, one of which had settled in Trastevere, another controlled the area of the Circus Maximus and the south-east of the Palatine where had fortified the Septizonium and had added a tower that still can be seen in the short side of the Circus Maximus, and called in the Middle Ages Turris in Capite Circi (but better known as Torre della Moletta for the small mill that stood next to it when the Fosso di S. Giovanni still flowed in the valley); finally another settled in the saddle between Palatine and Velia and surrounded the whole Roman Forum with walls, incorporating the Arch of Titus which became a gate but on which it was also built in elevation to have a tower.
The tower took the name of Turris Chartularia because it was close to the chartularium, that is the archive of the previous Byzantine empire and then the Archive of the Christian Curia which had its entrance in the same base of the tower. That one overlooked the entrance to the fortified citadel of the Frangipane and it was none other than the archway of Honor Arch of Emperor Titus, to that the tower itself was leaning, and since inside there was the bas-relief representing the Menorah it was called the Arco delle Sette Lucerne (Seven candles arch).
It is known with certainty that the tower had already been raised in the eleventh century and was a strategic cornerstone in the Roman struggles between Guelphs and Ghibellines and the Frangipane were supporters of the Pope, so that Pope Alexander III found refuge "in the strong houses of the Frangipani" when Frederick Barbarossa of Swabia arrived in Rome with his soldiers and imposed the election of an antipope.
Pope Alexander, as recalled by the chronicler Romoaldo Salernitano, resided right in the Turris Chartularia and from there at night he departed disguised as a simple friar for Gaeta where he resumed his pontifical dress. When the conflict with the emperor was resolved, Pope Alexander III to compensate Frangipane for the aid granted to them a feud that went from Torre Astura to Terracina. The Frangipani then, when it became Pope Innocent III, passed to the Ghibelline faction and ceded to Frederick II both the part of the Colosseum that was their property and by them fortified, and the fort Chartularia and therefore also the tower that constituted the entrance; in 1235 the tower was destroyed during clashes and after four years Frederick II gave orders to rebuild it.
In the second half of the thirteenth century theTurris Chartularia was the only one left standing inside the citadel of the Frangipane that, after the sack of the Normans of 1084, had built many others so that the whole area of the Forum was called Campo Torrecchiano (Towers Camp).
About some towers have retained the mempry of name and position they occupied: near the column of Foca there was the “Torre del Campanaro” (Bell ringer tower), near the Temple of Antonino and Faustina stood the Tower in Miranda and near the Church of the SS. Cosma and Damiano there was the “Torre dell'Inserra” , also in the fortification was part the Arch of Septimius Severus that had been incorporated in the perimeter of the walls and that's lean on a Tower of Brachis family (allies of the Frangipane) that remained standing until eighteenth century.
Chartularia Tower will be demolished in 1257 with another hundred towers, as a punitive action, by Brancaleone of Andalò, the Captain of the People who had been called to Rome to restore peace among the struggling Roman families. It was a tower of considerable size, "it had 43 feet long to the Amphitheater, and 37 and a half wide on the other side and still kept 40 feet in height" as Antonio Nibby wrote, or the tower had m. 14 x 12 base and a height of 13 meters still in 1829 when it was decided to dismantle it completely.
It was a very solid tower with walls 8 feet thick (2.5 meters) and the walls were built with marble "splinters" that probably came from the nearby Temple of Venus and Rome; the outer wall was made with clay bricks of "burial remains" shrinked. The door was on the west side, inside, and the access to the tower was with a removable staircase, precisely because the towers were the extreme bulwark of the fortified citadels and without a staircase it became almost impossible to conquer them even with a siege. Of the tower today are still visible, not far from the Arch of Titus, some quadrilateral boulders of peperino that formed the connecting strip between the walls and the real tower, everything else was taken away and dispersed.