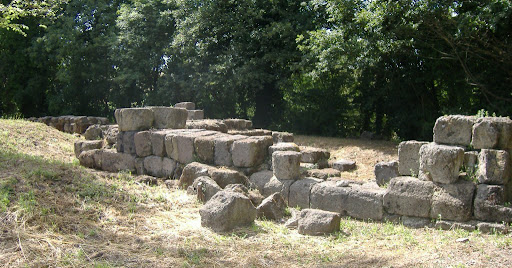 The position the Romans had chosen for their city was an accelerator of their expansion; after having absorbed the Latin and Sabine people they had to clash with the Veienti, an Etruscan people who controlled the Tiber Valley from the countryside to the north up to the campus salinarum.
Veii was located 16 kilometers from Rome and controlled the territory on the right bank, also known as Ripa Veientana, of Tiber and its riches were salt flats at the mouth of the river, the countryside and the upstream quarries; it was for to control these resources that the conflict with Rome soon broke out and was long and terrible.
In ager veientanus one of most painful defeats in history of Rome took place, the battle of Cremera almost wiped out the gens Fabia, but it was also the scene of one of greatest glories that a vir militaris could obtain: in 437 BC. the praetor Aulus Cornelius Cossus defeated and killed Lars Tolumnius, the king of Veii, and the Senate recognized him the honor of Spolia Opima.
But only in 396 BC, after having formed a large army and assigned the dictatorship to Marcus Furius Camillus, Rome managed to take Veii. According to Titus Livius, the city fell because the Romans in the long months of siege had dug a tunnel through which they emerged in the center of Veii near the Temple of Juno.
The riches of Veii were immense and with these Rome changed its appearance; the defeated city was destroyed and in Rome they began to build with the stone quarried from Grotta Oscura.
Grotta Oscura is the name of a porous, yellowish semilitoid tuff from the ridge located between Veii and the right bank of the Tiber.
Tuff is a pyroplastic rock that was formed following the considerable volcanic activity that affected the area between the Alban Hills and the Sabatini Mountains. Tuff has different colors due to its components and for this reason, as well as for its low specific weight and insulating properties, it has always been considered an excellent building material; still today there are quarries from which it is extracted because the area has a significant thickness of the deposits equal to 70-80 meters.
The color variation of the tuffs depends on their stratification, in fact the volcanic eruptions that took place between 800,000 and 200,000 years ago had pyroplastic flows, with different characteristics, which overlapped. Geological studies in the Tiber Valley have dated the earliest levels of tuffs to about 560,000 years ago and these are the so-called Grotta Oscura tuffs.
Romans needed the stone materials of veio's territory because the quarries that were located in Rome under the Capitolium and the Palatine were almost exhausted and in any case they were not sufficient for the great works that were being planned for the city.
Grotta Oscura caves were located about ten miles from Rome in a valley where a tributary of Tiber flowed and so it was used to transport materials to Urbs. The quarries were both open-air and underground and built with a system of pillared chambers with tunnels up to 100 meters long and 6-8 meters wide, sometimes even superimposed; these galleries still exist but are placed inside a military area and cannot be visited.
Many monuments were built with the stone of Grotta Oscura, including

1. expansion of Servian Walls of fourth century. B.C. - still visible today in the square in front of Termini Station -;
2. the Temple of Apollo Sosiano and also the nearby Teatro Marcello;
3. the Republican temples A and C in Largo Argentina;
4. the Temple of Hercules Victor at the Foro Olitorio;

to mention the monuments still visible today and where the Dark Stone is identifiable.
The tuffs of Grotta Oscura after first century. A.D. were less used because they did not have aesthetic properties of other tuffs such as, for example, the peperino and because the construction techniques had changed. The quarries were closed at the end of the sixth century. A.D. and extraction was not resumed until last century.