The Hillock of Stronghold Savella 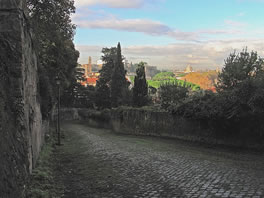 There are some magic places in Rome where it seems that the time has been stopped, between these the Hillock of Stronghold Savella (Clivo di Rocca Savella) than from the Square of the Mouth of the Truth go up to the Garden of the Oranges.
These names that evoke atmospheres of sweetness and serenity send back to the perfumes of Rome that perceives the one who allows himself to attract from a walk long the road that once time was leading to the Castle of the Crescenzi. This road already exist at the times of the Ancient Rome when his name was Clivius Capsarius because in the nearest there was the tabernae of the wardrobes of the Suburra’s thermae; in the high Middle Ages it took the name of alley of Santa Sabina until the last century.

In X century here the powerful family of the Crescenzi built his stronghold; the fortalice was surrounding the whole hill arriving up to Via Marmorata, where the bastions are still visible today, and was containing inside also the Basilica of Santa Sabina and of Sant’Anselmo.
There were the Middle Ages and the powerful Roman families of the Conti and the Orsini often were colliding with the Crescenzi, for this reason the residences were strengthened like true castles.
In IX and X century Castellum Crescentii accomodated the Saxon emperors Ottone I (880-912), Ottone II (936-961), Ottone III (980-1002) and Lotario di Suplimburgo crowned in Laterano in 1113.

The fortalice in XIII century had become owned by the Savelli, a branch of the Crescenzi that was coming from Monte Sabello in the neighbourhoods of Albano, which have given the name to the Stronghold.
According to the medieval legend the Savelli were descending from Aventino, son of Hercules and Rea, king of the Albans who had fought beside Turno against Enea. The king himself was encircled by the enemies and killed in the battle and (as historical Aurelio Vittore of the IV century A.D. report ). buried to the slopes of the mountain that taken his name. Where it was the grave it was transmitted orally and indications have not remained, but the historians of 800 were thinking that the grave to which it was referring the people were that one of Tito Tazio, also he buried to the slopes of the hill in a wood of laurels closed between two lanes calls one Vico Maggiore del Laureto and another Vico Minore del Laureto.

The powerful family of the Savelli managed to have two Popes: Onorio III and Onorio IV, this last one instead of living in Vatican lived in his palace-stronghold on the Aventino together with his family and his brother Pandolfo Savelli, powerful and respected senator of Rome. Often the stronghold was used as a residence shelter by the Popes; at the end of XIII century, Pope Bonifacio VIII received Carlo II of Angiò in this palace.
The stronghold Savelli had the control of the road of access with the sea, in fact in the Ancient Rome below it was crossing also the Road Salara; in order to arrive at the castle that the road was that one that today is called Clivo di Rocca Savella. The castle had many square towers put over regular distance and to enter there was a tower-door whose access was passing by a lifting bridge.
The stronghold around 1500 stopped being a fortification and became a wide garden contained by walls. This in spite of, the zone never lost completely his military vocation, also because of his exceptional strategic position.

During the events of the Roman Republic (1849), the French use the bastions of the stronghold as position for bombarding towards Door San Pancrazio on the Gianicolo where the troops guided by Garibaldi were facing the French armies.
The road, which it is possible to go only to feet, ends to the Garden of the Oranges, perhaps the most romantic terrace on the view of Rome.