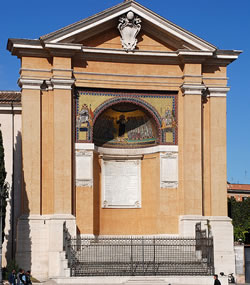 At the end of the sixteenth century, when the Pope already lived in the Palaces on Vatican Hill, Pope Sixtus V wanted to demolish the previous residence, the Patriarchus Lateran, but he recommended to preserve the apse of the Triclinium for the important meaning that the wall mosaics had for the Roman Church.
The apse known as Triclinium Leoninum was in fact the apse of the great triclinium of the Lateran Palace, the Patriarchium, that Pope Leo III had built with the gift that Charlemagne had sent him in thanks for the gift received, or the keys of St. Peter and the pennant of the city of Rome.
The gift received was a part of the booty that the King of the Franks had derived from the war against the Avars. It seems that the Pope had it built to have a hall to receive Charlemagne after the celebrations of Christmas in St. Peter's when, without having announced it, he crowned the king of the Franks Emperor of the Holy Roman Empire.
The Pope commissioned the architects to build a hall similar to one in the Imperial Palace of Constantinople. The great hall was preceded by a portico that overlooked the Campus Lateranensis; the sixteenth-century historian Onofrio Panvinio reports that hall had three doors that overlooked the Portico and a fourth side door that opened onto a corridor that connected directly with the Basilica. This great hall was demolished in 1589 by Domenico Fontana, charged with rearranging the square of San Giovanni in Laterano, since its function had failed because the Lateran palace was no longer the home of the popes since the 12th century.
The Piazza del Laterano already looked very different to Giovan Battista Falda in 1669, with the apse of the Triclinium visible to the right of the Scala Santa building. The architect Fontana had saved not only the apse of the great hall from destruction but also the three doors that led into the portico and were used in the Scala Santa building and placed in the atrium that separates the chapel of the Sancta Santorum.
The Triclinium was an enormous hall (68 x 15.37 m), with five niches on each of the long sides and a niche on the bottom side. Semicircular beds were placed in the niches where, still in the early Middle Ages, people ate while lying down as in ancient Rome. The room had a wooden ceiling, polychrome marble flooring, in the center a fountain with a porphyry basin, frescoes in the ten side niches and a beautiful and very bright mosaic on the bottom one.
The mosaic had a precise meaning, it was a message to the world of the division of powers between the emperor and the pope that however wanted to claim the moral supremacy of the Church on the Empire. (Triclinium Leoninum, Mosaic VIII century AD - Piazza San Giovanni in Laterano, Rome) In the marvelous apse mosaic on one side Christ gives the keys to St. Peter and the flag with the cross to Constantine, on the other hand, instead, the Prince of the Apostles gives to the same Leo the episcopal pallium and to Charlemagne the flag: the pope and the sovereign they jointly shared the care of the Christian people, like their illustrious predecessors, and responded exclusively to the authority of the Christis Church. In the central scene - a copy of the lost original - the Christ is represented after the Resurrection which, holding a book of the Gospel with the inscription " ", assigns to the apostles the mission to evangelize the world.
Today it may seem incomprehensible how the construction of a banquet hall could be useful in the game of politics; and instead it was a ruthless tool for the Pope if he wanted to achieve his goal. The banquet in the Middle Ages was one of the expressions of power, a sort of representation that was staged not only on civil but also on religious holidays. The Triclinium Leoninum, testifies to how the uses of the past Roman Empire were also part of the culture of the new institutions, in fact it was used for the religious banquets that the Popes offered to the clergy and citizens in the solemn feasts to signify charity and Christian brotherhood.
But perhaps for Pope Leo, offering a sumptuous banquet to Charlemagne also served to demonstrate something else; eating a lot was a sign of power for the new kings of barbarian origin and above all a lot of meat was considered a sign of strength and violence understood as the ability to impose oneself.
An anecdote - reported in a chronicle of a frank monk of the Novalesa Abbey - makes us understand how Charlemagne considered the food and rituals connected to eating. In 774 during a banquet after the capitulation of Pavia, Charlemagne saw a dinner companion who had accumulated a large quantity of bones under the table after having brutally chopped them, from this he understood that the diner was a great and brave warrior, Adelchi the son of Longbards king he had defeated.
The Triclinium that the Pope had built was therefore a room worthy of a great king for its dimensions and decorations and, certainly, even the banquet that was offered had to be at the height of Charlemagne.
Today, only the apse remains of the great hall and of the mosaic that decorated the apse, a copy can be admired. In situ, only the part to the right of the viewer remains of the original mosaic, depicting the images of Leo III and Charlemagne kneeling at the feet of s. Peter; an original part of the same mosaic is preserved in the Vatican Library.
The current arrangement dates back to 1743 when Benedict XIV wanted it inserted in a large niche in the neoclassical style; today it is located in “Porta San Giovanni” Square, on the outer wall of the Scala Santa building.