The treasure of Silversmiths 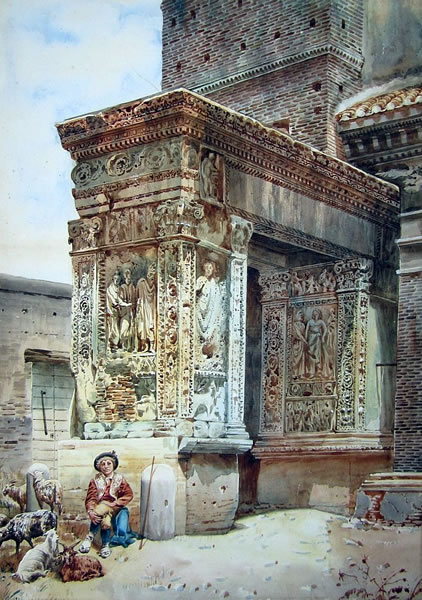 A rich treasury would be hidden inside and stand in Arcus Argentariorum, Arch of Silversmiths, the ancient arch built by the money changers, the bankers of Ancient Rome and the Forum Boario merchants who here had their affairs, in honor of Septimius Severus and his family.
The arch is formed by an architrave resting on two pillars, and when it was built was on the Vicus Jugarius to delimit the Forum area from trade exchanges area. Today the Arch is leaning against the San Giorgio in Velabro church and the bases of the pillars are still buried about 1 meter.
There is a legend about this arch and relates an incident occurred during the pontificate of Sixtus IV (XV century) when arrived in Rome a mysterious character who was carrying an ancient book. This seemed to contain clues to find a pipe leading to the place where it was hiding a great treasure: the treasure of Silversmiths.
The clues were a snake and a cornucopia and following these clues the man had come to Rome. In his searches for these symbols it seems that he found them on a bas-relief on the Arch Argentariorum where there was, also a figure with a finger pointed to the ground.
The man did so receive him from the Pope to ask for permission to dig, promising that whatever thing he found it would be of the Rome people.
The pope consulted with the Conservatives, the representatives of the people of Rome and later granted the authorization; man starts digging in one of the Arch pillars, went into the tunnel and disappeared forever. No one knew what it had happened; some said that it was slipped into the depths of the earth, others that he had found the treasure, and then disappeared without knowing anything.
Almost a century later, it happened another mysterious fact: in February 1601 a woman and her daughter were passing near the church in the direction to Campo Vaccino when they were suddenly swallowed up by the road and they will not be heard from again. In that time the people remembered the treasure hunter who died and the history of Silversmiths treasures continued to live and it was added a further indication, the treasure was among "the cow and the bull" animals on the arc reliefs.
Over the centuries the story became legend until the late nineteenth century, when rearranging the Church and the Arch, when these were cleaned up and the arch footings brought to light, on the left pillar appeared on bas-relief with the snake and the cornucopia and below an walled up opening side.