The treasure of Baia 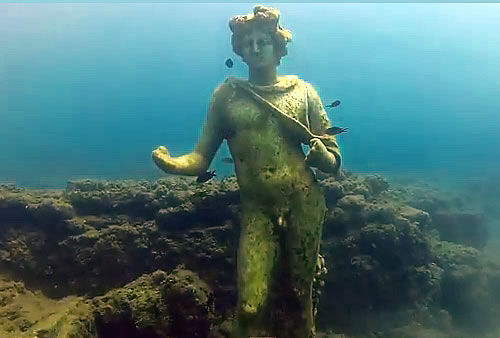 In 1954 during excavation work to bring to light the ancient Baiae, in a room of the Baths of Sosandra were found many fragments of gypsum that you thought were the "forms" that the stone cutters and smelters used to make the statues with which buildings were decorated.
Baia is located not far from the antrum of the Sibyl Cumaean and after the Roman conquest of the third century. B.C. It was primarily a religious center; the face of the city changed in the first century. A.D. when the richer aristocratic families built their residences. Even some members of the imperial family, built their houses so much that during the Neronian age was the most important imperial residence after Rome; in particular it has been identified the Villa of Lepida Domizia, the aunt with whom Nero spent part of his childhood when his mother was exiled in Pandataria.
In ancient Baia there were thermal springs of hot water that induced the rich Roman patrician families to build their houses, but the whole area has always been involved in bradyseism events that cyclically occurring phenomena of ground subsidence; a consequence of these the ancient coastal belt where construction had been made it has now sunk in the sea.Very important sites in Roman times as Pozzuoli, the most famous commercial city, Baia the most popular residential resort and Miseno the headquarters of military fleet, are now submerged.
Baia looked out onto a small lacus whose waters were warm and rendered wonderful the climate, so that Ovid called it "the appropriate place to make love"; along the beaches they were built gems such as the Nymphaeum of Claudius and the splendid villa of Pisoni.
Bradyseism slid the city, built around the volcanic lake Baianus Lacus (in communication with the sea through a channel), with its villas, baths, ponds, roads and its ports on the seabed of the Gulf of Pozzuoli and remained forgotten them until 1956 when an American pilot based at Capodichino took aerial photographs that showed the existence of symmetrical and regular shapes submarines. They were the streets and villas of ancient Baiae.
Following the sighting began scuba diving that have identified some points of interest only 6 meters deep: Nymphaeum of Claudius, the Baths, the villa of Pisoni, the villa on the prothyrum, so called for the Greek characteristics of the atrium.
In the open area of the sea it has been identified Portus Julius, the port structure that was built by Agrippa as a first arsenal of the Roman fleet during the civil war when faced Sextus Pompey; largely submerged has long quays and the shapes of the walls of many horrea; already in ancient times it was lowered to the ground on which the port foundations were then built in later age more residential houses of which are visible above the floor mosaics.
However more than the submerged part there is also a part of Baia that has remained visible over the centuries and that is attributable to the Palatium cum stagno built by Septimius Severus, as well as other buildings such as the villa Symmacus built in the IV century in Bacoli and that were destination for many travelers of the Grand Tour.
During surveys in the complex of villas surrounding the Baianus Lacus in 1954 was made an amazing discovery: in a service environment of so-called Sosandra Terme many fragments of various sizes of Greek statues were found piled. This discovery was immediately put in relation to other discoveries made in 1923 when a dredge fished two beautiful headless statues of Pentelic marble ...