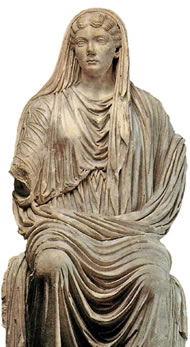 In ancient Rome, the dress indicated the condition of women and was considered tutela corporis. The dress of the Roman woman was composed of three parts: the tunica, a shirt worn on the skin, the stola a robe worn over the tunica, and the palla which was a square cloak worn over the stola and used by matron to cover her head when she was in public. The clothing was similar to the male one but already around the V-IV century. B.C. the stole began to differentiate itself and became ad talos demissa, that is, long to the feet with a broad edge at the end called instita.
Until the epoch of the Second Punic War the long dress was an exclusive privilege of the matrons; the stole differentiated the aristocratic women from the slaves and from the women of low condition who wore a short tunic, even the prostitutes wore a short tunic on which they wore a dark toga.
The stole was to protect the good woman from prying eyes and so down to her heels and even the head had to be covered; already in the marriage ceremony it was necessary to present a blanket with the Flameum, the auspicious veil of those red as that of the bride of the Flamen Dialis, the most important among the priests and the only woman who could not divorce in Rome. The woman, after getting married, every time she went out she had to wear the ball to cover her head; this behavior indicated her confidence and prevented any occasion of adultery and guaranteed the husband to belong to his own lineage of the children that the woman generated.
The costume was so stringent, equal to an obligation, that leaving the house with the head discovered for the woman could be a cause of divorce; Valerius Maximus tells that in the first century. A.D. a certain Sulpicius Gallus repudiated his wife because she had left the house bareheaded, motivating her decision with these words: "The law will only set my eyes to judge your forms. For these eyes, style your beauty, you will have to look beautiful in these eyes, you must rely on the infallible comment of these eyes. The fact that you are exposed in an overly provocative way makes you necessarily suspicious and guilty ",
Many things began to change in Roman society when, after the victory in the Second Punic War, the Eastern lands and the customs of those peoples who exalted shapes, beauty and luxury came under Roman rule.
In 195 BC the Roman matrons went down to the Forum to ask for the repeal of the Lex Oppia that forbade not only to own more than a half ounce of gold but also to have clothes of different colors. The abrogation of the law was discussed in the Forum before the people of Rome because the matrons imposed it even succeeding in overcoming the hostility of Cato the Censor who was against repeal because in his opinion it would have favored the spread of licentious customs and above all diminished the pater familias authority. The spokesmen of the matrons supported their reasons on a strictly legal level: the lex Oppia had been made to overcome the difficulties generated by the defeats of Canne and Trasimeno, the matrons had poured their money into the coffers of the state and supported the res publica, now that Rome had won and the wealth had returned there was no reason to keep chastised costumes and high taxes.
From that moment the matron's clothing changed, the fabrics became a thousand colors: the most sought-after colors were yellow, made from saffron and reseda, black from walnuts, red from purple and purple from crocus. The stole was replaced by more refined and refined clothes and even the use of wool was supplanted by linen, silk and precious veils.
The clothes were more beautiful and refined, but the law had not changed: when a woman violated the traditional moral and was stained with impudiance lost the respect and protection that was due to his body and therefore lost the protection corporis that was represented by her dress. For this reason, women who were guilty of adultery had to wear a tunic so transparent that their forms were visible to everyone, just like the prostitutes that were only covered by lightweight transparent clothes to show their bodies to customers.