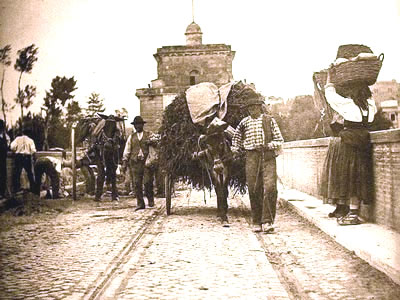 The first tram in Rome passed on Milvian Bridge: among the many things he endured Milvian Bridge there was also the passage of the tram, although it was pulled by horses still.
In 1877 the Dutch industrial Ernő Oblieght - the same who had built the Vesuvius funicular - obtained the concession to start a transport line by horses.
At the beginning it was placed a single track that lead from Piazza del Popolo ran along the Via Flaminia m. 2800 to the entrance of Milvian Bridge; on line 8 carriages were in service, of which four class "popular" open like estate car with cross benches and four "economy" class, which were closed and they also had a compartment of "first class" with twelve seats, all pulled by horses. The success was such that only a few months later the rails were lengthened for 1000 meters and climbed over the Tiber passing on Bridge Milvian.
The public transport line was a great benefit to the citizens of Rome even though the funds were not of Dutch or Belgian origin, but came from a mysterious London-based company that had raked the savings of small Italian investors, through Italian banks, and merged into in TFE with a loss of value of its shares by 60%.
In the business of public transportation in Rome they entered many business people chatted of the time such as Giuseppe Cesana and Desiderio Baccelli that had relationships with members of the then government led by Agostino Depretis.
Transport on this line will continue with horses until 1904; only on October 23 on the Piazza del Popolo - Via Flaminia -Ponte Milvio line is inaugurated the electrical traction on the line with a continuous current system already used for other lines open in the Capital.
Path will be called Line 1 and will have its terminal in Piazza del Popolo.
Until 1921 the public transport system is heterogeneous in Rome: horse-drawn tram then gradually replaced by electric trams but the horses will continue to be used for the omnibus; in the time of the maximum public network counted 300 carriages and 700 horses all the Maremma breed.
Choosing to have a public transport with horse carriages was dictated by the situation on the streets of Rome at the late XIXcentury; the city, especially in the historical center, was characterized by narrow, twisty, steep slopes and little vehicular bridges over the Tiber.
In 1880, along Via Nazionale was constructed a new tram line in horses that arrived to Piazza Venezia and then was extended to St. Peter after the construction of a special iron bridge built close to that of S. Angelo, it was called "Bridge of Firedogs "because it was made up of two separate structures for the two driving directions.
The bridge was "temporary" and realized with iron frame and wood flooring; during his short life it was required several interventions on the pavement and on the parapets too large and risky. In 1911 it was inaugurated the bridge Vittorio Emanuele II and a year later began its demolition; It was used for about twenty years and the iron structures were retrieved and used to repair other bridges - Industry, Magliana and Scafa -.