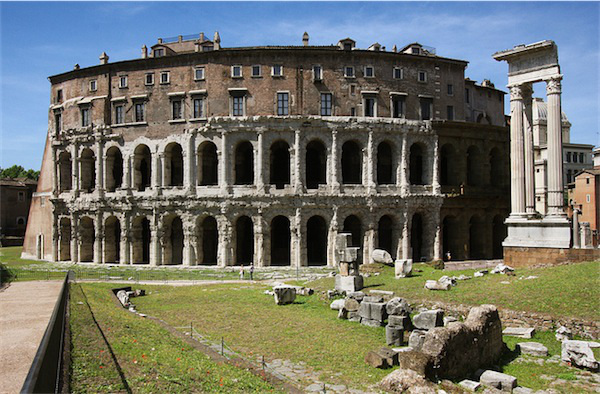 Theatre of Marcellus is perhaps the most ancient theater of which even today's architecture is visible; its construction was begun by Caesar, but finished by Augustus in 11 BC who dedicated it to Marcus Claudius Marcellus, son of his sister Octavia and his designated successor who also gave his daughter Julia in marriage but who died just 19 years.
The choice of location, on the eastern border of the Campus Martius, was not accidental because the building was constructed in the area where there was the Theatrum et proscenium ad Apollinem, the oldest theater auditorium placed on axis with the Temple of Apollo Medical.
In order to achieve it, Julius Caesar had done expropriate some lands and demolish the Temple of Pietas, a fact for which he was harshly criticized.
When Caesar died in 44 BC only the foundations were made and it was only after 20 BC that Octavian, already become Augustus, continued the project also he wanted to expand by purchasing land with their own money and even going to occupy the curved side of the Circus Flaminius, where from fourth century. B.C. only gallop races took place and celebrated the Ludi Plebei there.
The building, still not quite finished, was used already for the performances provided during the Ludi Saeculares of 17 B.C. .; it was finished four years later and dedicated by Augustus to his nephew Marcellus to which did make a bronze statue more big of true. Svetonius says that during the opening ceremony the curule chair of Augustus gave a crash and he fell on his back. The scene was later rebuilt by Vespasian, and perhaps a last restoration was ordered by Alexander Severus.
The diameter measured 130 meters, built as the Romans used from the bottom to up and without using depressions of the territory as the Greeks did. The height maybe touched 32 meters and had four orders, whose columns were at the first Tuscan, Ionic on the second and Corinthian on the third (level that is lost). The auditorium has been lost too, as well as the scene is no more accessible.

"The diameter of this theater was 538 palms, and could hold thirty thousand spectators ... it is a beautiful remnant of the ancient Roman architecture, which the moderns took like model of the Doric and Ionic orders, and of which they are served to determine the proportion of the two orders, the one above the other place."
"The city of Rome or Short description of this proud city – 1779"

This theatre presents some elements of strong innovation in building techniques, the most important is the choice of a site which does not allow to take advantage of the trend of the land for the construction of the tiers and immediately after the use for the first time in a consistent manner of lateres cocti (brick), instead of the tufa stone, for the construction of load-bearing walls.
The theatre was used until the fifth century A.D. and probably it was abandoned after the sack of Rome in 455; in the Middle Ages the area fell into the situation of abandonment because it was subject to the Tiber floods. The theatre scene disappeared under the mud that the waters of the Tiber left by retreating and so there were built buildings that rested their foundations on the substructures of the perimeter and radial walls of the ambulatories.
In the XII century, these houses built inside the theatre formed a fortified town called Monte Faffo, corruption of “Fabio” because were property of Fabi family; then he passed to the Pierleoni that in the fourteenth century gave way to the Savelli family. The Savelli in the first half of the sixteenth century demolished the medieval buildings and they built by Baldassare Peruzzi a real palace, that they belong to the two floors in the Renaissance style that can be seen on top of the curved side of the theatre arches.
When Rome became the capital of Italy the vast project to restore the monuments of Ancient Rome to the city also involved the Theatre of Marcellus: the theatre's arches and surrounding areas were expropriated and get rid of shops and houses, and the architecture was recovered.
The area is however still subject of archaeological investigation so that recently were found in the adjacent Piazza Monte Savelli the walls of post-scaenium, also indicated in the Forma Urbis Severiana and a white marble basis of large dimension, carved on four sides with scenes related to the myth of Hercules.
Theatre of Marcellus was well preserved for its solid foundations that rest on a concrete slab cast on oak pilings that compress the clay soil.
The only decorative elements of the facade were of theatrical masks, of enormous dimensions, carved in the round, in white marble of Luni (Carrara predominantly) recovered in fragments during the excavation of the thirties years of 20th century. They reproduce, very larger than true proportions, masks that the actors wore during stage performances, characterized by strongly accentuated and expressive features as well as by a huge mouth that is the most remarkable feature of the ancient mask physiognomy. The mascks are now on display in the showcases of the Argentina Theatre.