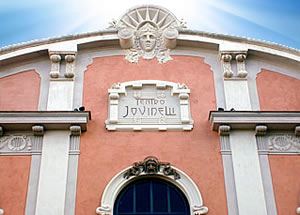 On 3 March 1909 the Jovinelli Theater was inaugurated that wanted to be the alternative to the committed theater and, after various vicissitudes, it is still today the temple of comedy in Rome. The theater is located in the Esquilino district in the same area where at the time of Ancient Rome the Horti Liciniani founded.
At the end of the nineteenth century the whole area was built according to the Savoyard model, long and straight streets flanked by five-story buildings that opened onto three main squares, one of which was Piazza Guglielmo Pepe which soon became the place where to hold the fairs and the popular festivals, here there were rides and improvised stages where acrobats and artists of all kinds were exhibited and here arose the first theater dedicated to popular comedy, to satire and the show defined as light.
The square was certainly as Ettore Petrolini, histrionic actor of the Roman popular theater, described it:
Piazza Guglielmo Pepe .. ... .. was, at that time, a huge square consecrated to the shacks of the charlatans; .. ... .. it housed all sorts of booths, from target shooting to the anatomical museum, from the carousel to the theater of roosters that sang and danced prodigiously on a bandon slab .
The shows for the people and the shows considered light were held in structures mostly of wood in which the risk of fires was always high. Even the theatrical manager Giuseppe Jovinelli in Piazza Guglielmo Pepe had a wooden theater where jugglers, contortionists, illusionists and actors performed. In 1863 the Alibert Theater in Via Margutta was completely burned down and in 1905 Jovinelli saw his Margherita Theater burning and this was probably what convinced him to build a masonry theater for the representation of popular pieces.
In this area dedicated to popular entertainment, the manager Jovinelli decided to build a beautiful and modern variety theater like the theaters destined for prose, and created a real jewel, with the facade decorated by stuccoes and the hall in the shape of horseshoe with a thousand seats, with cast iron columns, velvets and huge chandeliers.
t is the only Art Nouveau theater in Rome characterized by the central two-storey building with large openings, crowned by the arched pediment (Marina Sennato).
Old ptotographas show a two-storey building with light colors and sumptuous lines. The ground floor had three doors with round arches, from which one could access the foyer which led the spectators directly into the auditorium of the theater, located at the level of the entrance floor.
Two windows at the sides of the front of the structure resumed the line of the doors, while in the space between the doors and the windows were posted the notice boards for the posters. The façade on the second floor, which housed offices and dressing rooms and, on the upper level, the stage equipment, had three doors identical to those on the ground floor. The entire façade was crossed by stucco pilasters strips decorated at the bottom with plaster flowers, while the two central pilasters terminated on the roof, where two eagle-shaped sculptures were placed. The trabeation on the top of the building looked like a sinuous wave with a typically floral style, in whose center stood a shell with a human face. The theater began its activity with a show by Raffaele Viviani and then on its stage came comedians like Ettore Petrolini, Armando Gill, Gustavo De Marco and others; it was Mr. Jovinelli to be present for the first time in Rome the great Toto, wich for the great success ended up staying on the bill for three years. In the twenties and thirties, the activity of the theater underwent transformations both for the fascist laws prohibiting political satire and the use of dialect but also, and perhaps especially, for the success of the cinema; the theater became the headquarters for boxing matches which nevertheless attracted much public. After the Second World War, the theater hosted many vaudeville show magazines.
Jovinelli managed the theater until his death in 1924, then the direction passed first to his sons then to his grandchildren at least until in 1982 when a fire destroyed him in his interiors. The theater remained closed for twenty years, then the new property renovated it and in 2001 the theater was reopened. Even today in his poster dominate the comedy and avant-garde performances but his stage also hosts works of classical theater.