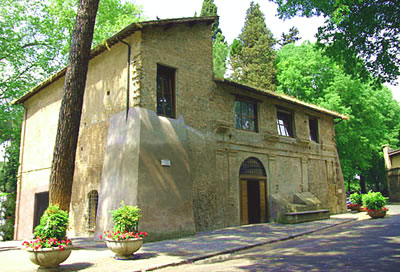 On the slopes of the Celio where in the imperial age the Area Apollinis was located, in the 6th century some Greek monks built an oratory dedicated to S. Agatha; it was a diaconia for the reception of pilgrims coming from the South and the East and it was until the end of the 12th century.
The first official document attesting the existence of a Monasterium Tempuli dates back to 806, when the building was sacked by the Saracens. These news of the monastery were traced in some parchments, preserved in the Archive of the Dominicans, which date from 1150 to 1220 and are considered relics as touched by the same S. Dominic who lived here part of his Roman stay, guest of the nuns to whom had been assigned.
At ninth century ending, the small church inside the monastery became one of the first Marian shrines of Rome for a Byzantine icon representing the Madonna. This image had been donated to the nuns by a pilgrim coming from Constantinople and was considered a miraculous icon because it was said to have gone pale in the days of the Passion and, above all, because it was acheiropita or not painted by human hands but cast of the body of Mary when, still alive, she leaned against a column of the church erected in his honor in Lydda.
The icon is called of the Virgin Haghiosoritissa and would come from the Basilica of Constantinople which houses the most precious relics of the Virgin; the icon is clearly of oriental origin recognizable not only in the stroke and in the colors but also in the drafting technique.
A legend of the century XI tells that Pope Sergio III stole the icon in Laterano but this would return alone in the Monastery. After the miraculous event the Pope, repented, issued in 905 a bolla by which a property he donated to the nuns - a 150-hectare estate called Casa Ferrata near Via Laurentina -a condition that they recite, a hundred times a day, the Kyrie Eleison and Kristi Eleison to the Virgin of the icon.
The presence of the Virgin Haghiosoritissa in Rome is documented since 1221 when some documents report that it was taken to the nearby convent of S. Sisto because Santa Maria in Tempulo was closed and the nuns moved here.
In the convent annexed to S. Sisto the nuns remained for 356 years after which they were again transferred due to the state of degradation, abandonment and danger that had been established throughout the area, which is today known as Via delle Terme di Caracalla, where passed an unhealthy Marrana that was used to irrigate fields and the risk of malaria was very high. The nuns and the icon moved to a convent in Via Magnanapoli where they stayed for another 356 years until 1931 when they had to move again carrying the icon with them; : today the icon is located in the Oratory of the Rosary in Monte Mario and is visible only on Sundays.
The monastery of Santa Maria In Tempulo underwent various transformations until it was annexed to Villa Mattei in the seventeenth century and became a nymphaeum, so in the XVIIIth century it had become a barn and then the studio of a painter, to be left abandoned at the end of the 19th century.
The historical value of the building was recognized during the works for the creation of the Archaeological Walk and in 1927 and its restoration was decided. Today the former monastery is owned by the Municipality of Rome which uses it as a place of representation and for the celebration of civil marriages.