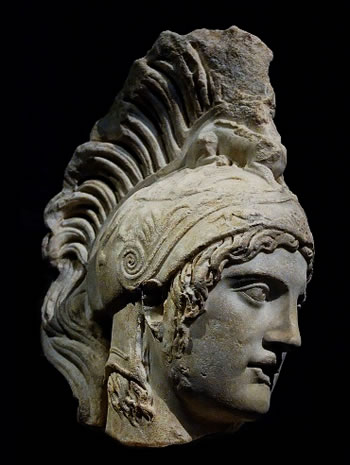 The oldest temple dedicated to the god of war, Mars, was located just outside the walls, past Porta Capena near the first miliarum the Via Appia, in a dominant position on the valley where the river Almone ran. Here Roman generals gathered the legions before leaving for the military campaigns and here the soldiers, returned from the war, left their weapons before entering in the City.
The temple dates back to the IV century B.C. and, as Livy reported, it was built for a vote during the Gallic War and dedicated on June 1 of 368 BC by duomvir Titus Quinctius. A road was built to get there that, it started from Porta Capena and being uphill was called Clivus Martis; when in 189 BC was floored the first mile of the Appian Way, it was also paved the clive leading to the temple and were added some porches along the way.
Today, nothing remains of that temple unless its representation in the bas-relief of the attic in the Arch of Constantine. The relief comes from the Trajan arch, who was at the Via Appia between Porta Capena and the Arch of Drusus: on the bas-relief the Temple of Mars is detectable on the left in a higher position as placed in hillock.
As further confirmation of the location is also the discovery, which occurred at the end of the sixteenth century, of the inscription posted after the paving of the road and which is now in the Vatican Museums. However, the guides of eighth century - Anonymous Einsiedeln - showed it positioned still in a primary site where he was to be clearly visible due to its size of 6 feet x 3.5 (cm. 179X103).
About a Temple of Mars speaks both Cicero in his epistles, and Livy which also refers to it as a simulacrum Martis because in the temple inside there was a statue of Mars, most likely the one erected by the consul Marcus Claudius Marcellus in 216 BC for a vow made during the war for the conquest of Syracuse (CIL I 2609), and which Julius Obsequens in his "Book of Prodigies" tells that was seen sweating. In the temple there were also statues of wolves, animals sacred to Mars, and therefore the area in the late empire was called Simulacra Luporum also.
Still unclear are the reasons why inside was preserved stone called Lapis Manalis that had magical powers, in fact, in case of drought it was taken from the temple and brought to Rome where priests celebrated a rite of Etruscan origin: from Temple of Mars started the procession led by the Pontifices and the stone was transported (aqualicium) until the Clivus Capitolinus from which it was made tumbling toward the Forum so that it could unleash the forces of nature; behind the stones, the matrons with barefoot and her hair down came down saying prayers to Jupiter because send rain; there was then a second bloody part of the rite involving the sacrifice of a victim.
Other events and other celebrations were related to the Temple of Mars: at the Ides of Julius gathered near it the equites to the great annual ceremony called transvectio equitum, the big parade of knights who had been ordered by Augustus to commemorate the victory of Regillo Lake .
The feast of dedicatio fell to Kalendae Iunii (June 9).