Temple of the Storm 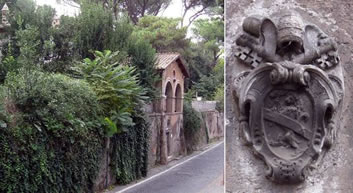 Aedes Tempestatis, was a temple built to fulfill a vow of Lucius Cornelius Scipio, son of Barbatus, who during his consulate in 259 BC conquered Corsica and the city of Alearia.
The Roman fleet was engaged in the great naval battles of the First Punic War; the conflict was marked by a long series of naval battles alternated with three shipwrecks caused by serious storms out of the ordinary that destroyed more than 500 ships of Rome. Nevertheless, the determination of the Romans never diminished and allowed them to bring five great naval victories over the Carthaginians. To be able to save its fleet and bring an important naval victory over the Carthaginians, Lucius Cornelius erected the temple in honor of the goddess.
The cult was created to to protect from the forces of nature and this is made explicit by the name itself of the deity, but God or Goddess of the Storm?
In greek pantheon there a Goddess of the Storm daughter of sea King Poseidon and the Nereid Amphitrite. The myth says that from their union were born four children who were minor deities: Triton, sea creature but with the body for half-man half-fish; Roda, nymph protector of the island of Rhodium, Benthesikyme goddess of the waves and finally Cimopolea goddess of violent storms.
Hesiod tells about Cimopolea powers and his place among the gods to report on how the Poseidon conceded in marriage to the giant Briareus with a hundred arms that men called Aegeon (Aegeon); just the name given by the groom to Cimopolea recalls an ancient Italic godhead who presided over the storms, the Etruscan god Easun, perhaps the greek Jason or perhaps Egeon the spouse of Cimopolea.
But before the Greek contamination in IV-III century BC the dark forces of the sea were still controlled by an archaic god, a god of storm that had a human face and a bull form, that the Etruscans worshiped as one of the most powerful deities and that, according to a series of studies, would have origins in Asia Minor, in Anatolia and even more specifically in the city of Troy which was the protector. His name was Tarui, tarhui, Tarhun and Tar-hunt and his worship was brought to Etruria by the Pelasgians; by his name would have arisen that ones of Tarquinia and Tarchon. The name of God is just the clue: the worship of the God of Storm arrived in Rome with the Etruscan Tarchon, who later became the fifth king of Rome, Tarquinius Priscus.
There aren't, however, literary references and / or inscriptions that confirm this possible origin of worship and then without other evidence of connection / assimilation shall be deemed the Goddess of Storms as proper to the Roman religion, as are Fides, Pietas, Honor or virtues which was given a higher value. Marine storms represented a higher power that the Roman army had to face when it began to deal with Carthage. The first Roman fleets were practically annihilated by the Carthaginians not by sea storms but because they had "admirals" who did not know the sea and did not know to lead ships.
They honored so the Dea Tempestas as Cicero says in his De Natura deorum chap. 2 :

"for what concerns the clouds we will appeal to the storm gods, to whom by Roman people were the rites consecrated" ...