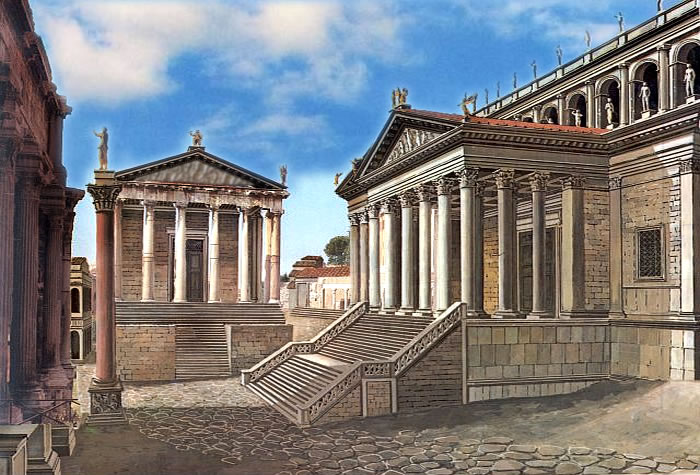 Still today one of the most ancient temples of the Roman Forum, second to ones of Vesta and Jupiter only; it is easily distinguishable among the vestiges of the monuments, its eight columns stand out majestically in memory of Roman people.
Its construction seems to have been commissioned by Tarquinius Superbus but the temple was finished a few years later when in Rome began the republican period; the first construction probably covered a pre-existing ara dedicated to the god of the golden age.
The dedicatio took place on December 17th of the year 498 BC by the consul of that year, Titus Larcius, and that one was since then the dies natalis of the temple and the day on which the Saturnalia, the feast days that celebrated the end of the Roman year began. It was the feast of the wildest freedom in which even the world of Roman rules turned upside down and slaves could eat at the same table with their masters.
In the internal cell there was the statue of Saturn, that was empty inside, because in the days when they celebrated his feast was filled with oil, while some wool bandages wrapped his legs throughout the year, in those days were removed. The bandage of the legs was a kind of restraint with which the Romans prevented Saturn leaving Rome and at the same time celebrating the time when Jupiter had kept him prisoner and forcing to meditation and pain. After this time Saturn had become a good king, a god of agriculture who ruled wisely and decided to live in the Italian peninsula, which was called for this Saturnia Tellus, or Earth of Saturn.
To the God Saturn, the Romans dedicated the first great temple in the Forum. Under his high podium there was a cell in which the treasure of the state and the banners of the legions were kept, to its walls were hung the decrees of the senate (on the eastern side of the podium are still visible the holes for the hooks to which the bronze plates were hung). The temple for this use was also called Aerarium Populi Romani or also Aerarium Saturni; the proceeds of taxes, tributes, sales of public goods, war and prey allowances, public contracts, financial statements of the magistrates, census registers, the texts of laws and senate-consultations, protocols of elections and oaths of magistrates were kept in the cell. Inside there was also the scale that was used to weigh the gold. It was still the state treasury when, during the civil war, Julius Caesar took over it founding 15,000 gold rods, 30,000 silver and 30 million sesterces.
Its importance as a treasury gradually decreased in the imperial age, when the proceeds of taxes and preys entered into imperial attributions; in the III century d.C had become only the case of the municipality of Rome.
The temple has gone through all the history of Rome and more than once has been restored since the 4th century BC after having been burned by the Senoni Gauls. In 283 AD, under Emperor Carino it was completely destroyed by fire and what you can still be seen today dates back to the restoration that was carried out in the III century. A.D. and to which the inscription Senatus populusque romanus incendio consumptum restituit also refers (the Senate and the Roman people rebuilt the temple destroyed by the fire)
The greatness of the podium strikes still today, it was brought to its current level in the restoration of 42 BC. ordered by Munatius Plancus - the same patrician who the following year, as legatus pro praetor, founded the city of Lungdunum - with the loot he had brought back from his victory over the Rhaetian people. The podium, made of opus caementicium, was completely covered by travertine and on the east side there was the door that allowed to enter in the rooms of the treasury. The temple was erected above and, in order to enter it, Munatius Plancus had built a large staircase that allowed to reach a forepart and from this the cell of the temple where the statue of Saturn was.