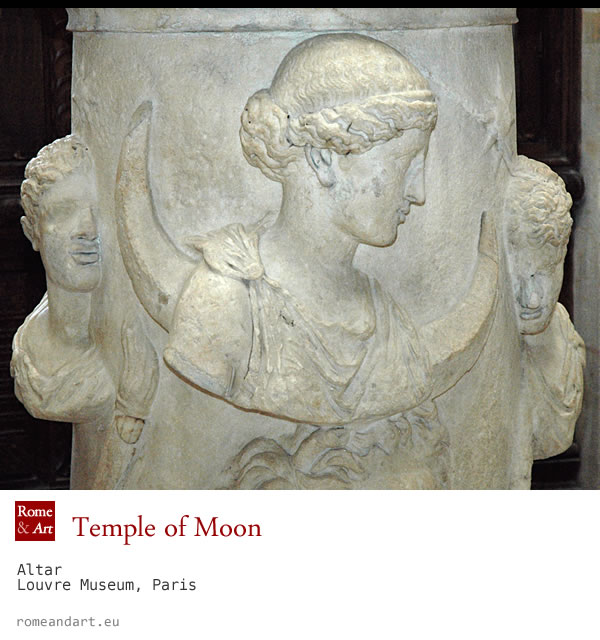 Luna was an archaic goddess of the Latins and her cult was brought to Rome by Titus Tatius but Servius Tullius was who built a temple to the goddess in a position overlooking the Porta Trigemina on the Aventine, the hill that had enclosed within its walls but left out of the Pomerius.
In 6th century B.C. here lived that part of Roman people of Latin origin that belonged to the marginal classes of the people; with the construction of this temple the work of urbanization of the area was started and Aventine Hill became, just a century later due to the lex Icilia, the residential area of the plebeians and then home to the concilia plebis and the activity of the tribunes.
The Moon Goddess was the personification of the moon, often united in the myth to the star of the day, the Sun, in a double bond of brother-sister and husband-wife; in classical times she would be for Romans the "three-headed" goddess in the becoming of hers moon phases: celestial Selene as moon in its fullness, Hecate symbol of the Black Moon or Waning and finally Artemis the crescent moon.
The threefold lunar aspect represents the feminine in its life cycle where the full moon indicates the fullness of the woman who awaits a child, with her belly full of birth and new expectations, representing the reproductive power of the woman. In the 6th century Moon Goddess was still the archaic goddess revered as the one who presided over the cycles of the earth, to fertility and also to childbirth.
Priestesses were over for the cult of the goddess, sought and feared as they also practiced magic rituals that were performed in secret; from these ancient propitiatory rites linked above all to childbirth and birth, the legends about the "strine" or witches will take shape.
The feast for the dedicatio of the temple fell on March 31st, while the Feast of the Moon Goddess will then become that of Diana which was held on 13th of August twith votive offerings and banquets that lasted for the whole day.
The Temple until the first century A.D. he was outside the Pomerio, where legionaries who had returned from victorious campaigns could also stop; together with the other temples of Ceres, Minerva and Diana, it formed a religious area on the Aventine almost in contrast with the richer temples of the Palatine and the Forum.
There are not many literary references to the Temple of the Moon; the first is from 182 BC when, during a storm, the wind, which had already knocked down some bronze statues on the Capitol, unhinged one of its doors and sent it crashing into the back of the Temple of Ceres.
In 146 BC Lucius Mummius Achaicus, the triumphant in the war against the Achean League, donated some objects to the Temple, part of the booty taken in Corinth: several splendid bronze vessels that were used in the theater to amplify the voice.
In 121 BC the temple was one of the stops during the flight of Caius Sempronius Gracchus, tribune of the plebs who, to escape the riots that broke out following his proposals for an agrarian law, had to take refuge on the Aventine; the tribune in the race to save his life dislocated an ankle jumping down from the podium of the Temple of the Moon (De viris illustribus, 65, 5).
Still in 84 BC, as Appiano recalls (De bellis civilibus, I, 78),the Temple of the Moon was struck by lightning precisely in conjunction with the death of the consul Cinna, one of the protagonists of the Roman civil war who saw Marius and Sulla oppose .
The last news is related to his "disappearance": on the night of July 18, 64 AD, when the temple was reached by the flames of the fire that had broken out at the Circus Maximus, almost certainly the vigiles could not reach it and then burned completely; it was never rebuilt.