The most important temple in Rome was located on the Capitoline Hill, it was dedicated to Jupiter Optimus Maximus and Juno and Minerva, or the Capitoline Triad; it was built for the vow made by Tarquinius Priscus during the wars against the Sabini.
The construction of the Temple of Jupiter on the Capitoline Hill marks an important change in the Roman religion which for 170 years since its foundation had worshiped the gods without any simulacrum. The anthomorphic representation of the divinity identifies the evolutionary stages of religion in Rome; from the archaic phase without temples but only with temporary altars, it would then pass to the time of Numa Pompilius with simple temples but without any representation of the divinity to arrive at the age of the Etruscan kings who build large temples and represent the gods with human features. It will in fact be Tarquinius Priscus who will call Vulca to Rome to create the clay statues of Jupiter and Hercules.
In order to build the great temple, which Tarquinius wanted on the top of the most important hill, it was necessary to remove or move the aedes of other archaic divinities, but before doing so Tarquinius wanted to listen to the haruspex Attus Navius so that everything would be done in compliance with the will of the divinity. Titus Livius recounts that Attus Navius questioned the deities and from the reading of the entrails of the sacrificed animals the response was obtained: all the archaic deities agreed to be moved with the exception of Terminus and Juventas who were incorporated into the new temple, indeed according to the haruspices the permanence of Terminus was an omen of the duration of Rome.
The works began in 575 BC , during the reign of Tarquinius Priscus, with the construction of an enormous wall that had the function of an embankment, during these works a skull was found that the legend says was of the mythical Etruscan leader Aulus Vibenna and from this the top of the hill was called Caput / O / i or Capitolium.
But when Tarquinius Priscus died the temple was not finished and for his successor, Servius Tullius, the temple did not have the same symbolic value and he preferred to carry out other works that Rome needed; it will be up to the last Tarquinius to take care of the construction of the great temple.
It was a colossal undertaking to which Tarquinius, known as the Superb, destined a tenth part of the booty won with the surrender of Suessa Pometia, the capital of the Volsci. But in addition to money, it also took a lot of men to build it and since slaves were not enough, slavery was imposed on the Roman plebs and this was one of the errors that led to the so-called "expulsion of the Tarquins" and the change in the form of government.
For its construction and decoration the Etruscan artists were called to Rome who found accommodation along the alley that led from the Roman Forum to the Velabrum and where they continued to have their tabernae even in the following centuries so that for their presence it was called Vicus Tuscus.
The temple was built on a very high podium about 200 feet long (over 60 meters); its measures were imposing, mt. 62 x 54 - to have an immediate representation just think that the Curia Julia (intact and visible) measures mt. 27 X 18 - with the width slightly less than the length; it was facing south and had three rows of columns on the front and one on each side. It had three parallel cells, separated by walls but covered by the same roof: the central one dedicated to Jupiter, the lateral ones to Juno and Minerva.
As Vitruvius recounts the columns were very distant from each other and therefore the temple was areostyle; the designers then built a temple with the characteristic plan of the Tuscan temples, leaving a wide light between the rows of columns that required the use of wooden architraves rather than stone.
According to Dionysius of Halicarnassus - which is considered the best literary source in the history and characteristics of the temple - Tarquinius Priscus had commissioned to Vulca, the most esteemed Etruscan coroplast, to create the statue of Jupiter, represented standing and with a lightning bolt in his right hand, and also that of the painted earthenware quadriga to be placed above the roof and which was replaced by one in gilded bronze only in 296 BC.
Also on the roof was the acroterial statue of Summanus, the archaic god, the nocturnal manifestation of Jupiter who presided over the nocturnal lightning, then struck by lightning in 275 BC, an event that the haruspices interpreted as a request to have its own temple which was then erected and dedicated in the Circus Maximus.
From the cells of the Temple it is posible descending into the cellars where the books of the Prodigies that Tarquinius had bought from the Cumaean Sibyl were kept; then there were further underground rooms, the favissae, where the ex-votos and the simulacra of the divinities of the archaic cults were deposited ... 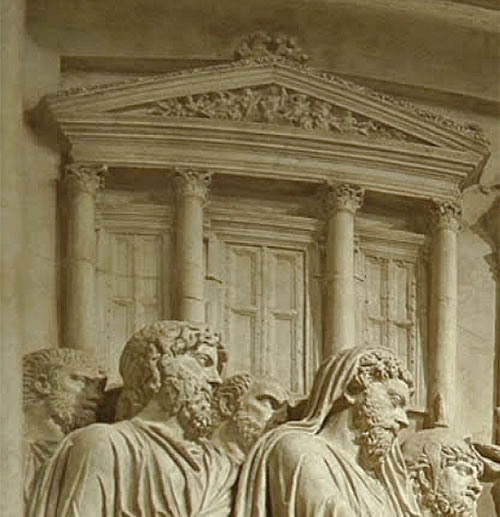 Bas-relief with Marcus Aurelius making a sacrifice in front of the Temple of Jupiter. In the background, the pronaos of the Temple with doors that allow access to the three cells of the Capitoline Triad: Jupiter, Juno and Minerva - Palazzo dei Conservatori, Rome IT 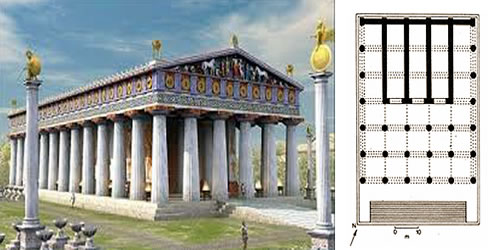 Plan and hypothetical reconstruction of the temple built by the Tarquins 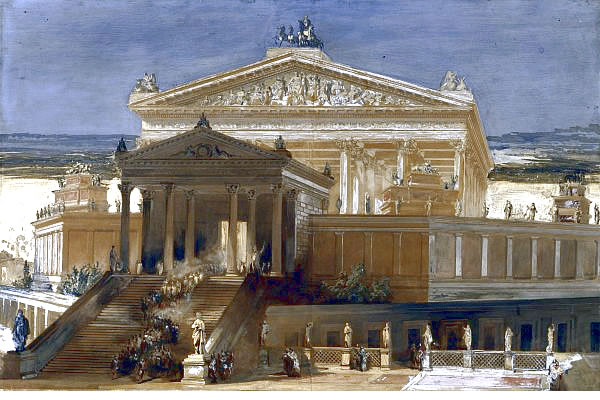 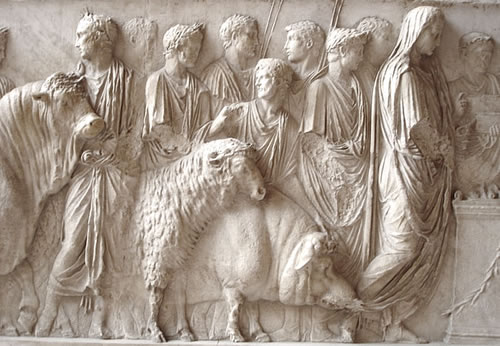 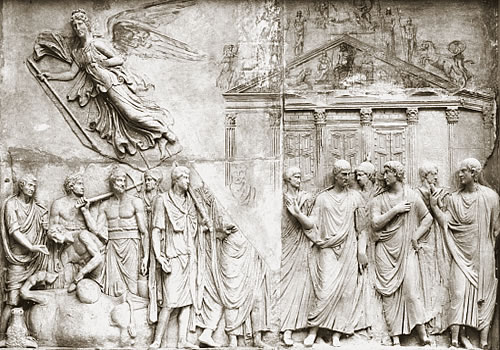 Bas-relief with reproduction of the temple - Louvre, Paris 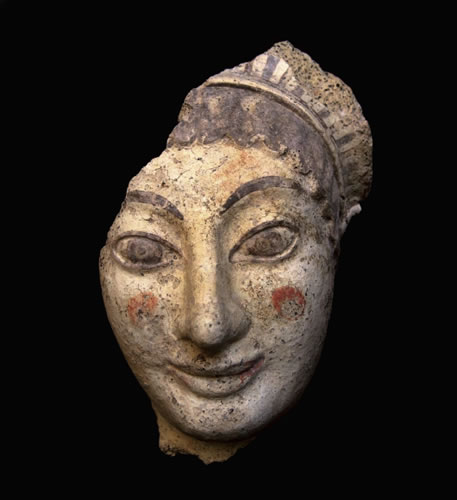 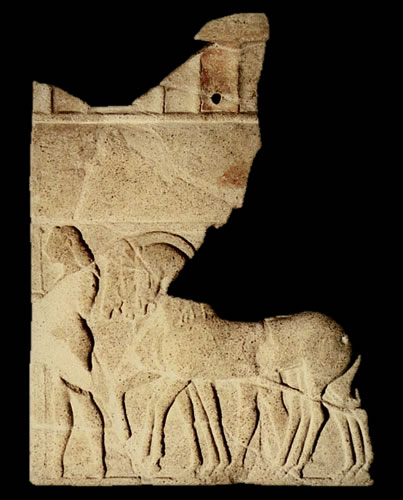