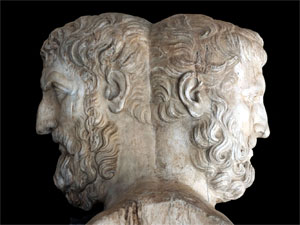 Nothing remains of the Temple of Janus of which we only have a representation on the back of a Nero coin. It was located not far from the Forum, along the Argiletum, the Vicus that passing between the Curia and the Basilica Emilia linked to the Suburra.
It was dedicated to the god Janus who presided at the beginning of each and every end, a Roman archaic deity of which we have no record of the Greek gods. Even his name is not yet clear on what is derived although seems connected to terms that indicate a movement, a crossing.
In their prayers was the god that the Romans cited first, to confirm that it was his prerogative was also called Ianus Pater and Deou deorum, epithets still linked to the archaic era.
According to legend, the first temple dedicated to Ianus Geminus was built by King Numa Pompilius; had a simple architecture, it was not a temple but an arched walkway, closed by doors on both sides: it is depicted on coins minted by Nero in 66. Inside was the two-faced god statue. These ports remained closed in time of peace and open in time of war, in order to allow God to give his assistance to the Roman soldiers.
There are not many descriptions of how it had to be done, and it seems that it has been destroyed and rebuilt in the square of the Transitional Forum by Domitian, when he restored the Curia in the 94; however, according to Servius the commentator of Virgil, the Domitian restored involved a change in the structure of the temple that was turned right in the covered walkway of which has already been mentioned, and that may have been similar to the Arch of Janus which still is in the Velabrum area.
As evidence of this events development is the testimony of Festus by which right in the Temple of Janus was kept senatus consultum of 477 BC when the gens Fabia asked to face alone the Veienti; if the Senate decided to meet in the Temple of Janus it means that this was big enough to hold 300 people. After the Christianization of the Empire, the temples of the pagan gods were closed or demolished, the custom of opening / closing of the doors was abandoned and Ianus Geminus closed.
But, according to the testimony of Procopius in the Gothic War (I, 25), the tradition was so entrenched that decades later, during the siege of the city by the Goths (537), some citizens tried to re-open the doors, to allow the god can rescue Romans in danger, but without success ...