Tavern of the Saline 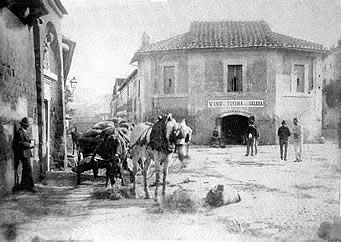 Yet in the nineteenth century salt to Rome he came from the salt marshes of Ostia pond in sacks after they were transported by boats that sailed up the Tiber to Ripa Marmorata. Here the sacks were then loaded onto wagons and carried to the Salt warehouses that were on the slopes of the nearby Aventine.
The tavern was located between Via Salara to right and Via Porta Leone on the left; the atmosphere that you breathed in this place is perceived in an old photo where in foreground you can see a trooper leaning against the wall of the salt warehouses of which acknowledge the Renaissance portal in marble with the inscription:

Almost a premonition: the Salt Warehouses were demolished at the beginning of 900, as the entire block in that had part the tavern, for the construction of the Tiber embankments.
Today Square of Salara is called Square of Emporio and with his eyes you can get until Square "Mouth of Truth"; everything has been demolished, instead of the buildings there are now only two asphalt strips with a central green flower bed where it was placed a water trough that was first in front of the Temple of Hercules in the near Foro Boario.