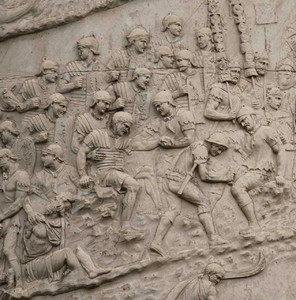 In the castra of the Roman legions engaged in wars campaigns were frequently identified the "valetudinarium", that was a buildings where the soldiers who had to be treated were housed,. These buildings existed not only at military camps but also in large farms, gyms, where they trained gladiators and athletes, so overall they were intended for the treatment of people who worked for the state.
The opening of valetudinaria for the cives is due to the same doctors who worked in the valetudinaria militares. These doctors open their tabernae along the most attended streets and famous were the medicatrinae near the Temple of Aesculapius on the Tiber Island where, under the control of the medicus and his disciples, sick people belonging to all social classes were treated. Also Galen, a famous physician of the 2nd century BC. he had begun by working in the castra of the legions.
Medicatrinae were at the same time outpatient clinics, dispensaries for medicines, first aid posts, but also clinics for post-operative hospitalization. Their sparse furnishings included chests and boxes for instruments, medicines, towels and bandages, containers for water, oil and wine, chairs and stools and a cot.
Instead, the instruments were rich: scales, spoons, spatulas, glass ointments for preparing and storing medicines; scalpels, forceps, hooks, probes and speculations, catheters and cannulae, needles and scissors, mostly in bronze, for surgical interventions and wound treatment. Instruments such as these are widespread throughout the Roman world and the presence of particular tools reveals that there were also specialized doctors such as ophthalmologists, otolaryngologys, gynecologists and dentists.
In Rome, during the Republican age, the practice of medicine was the exclusive responsibility of the pater familias who performed this task both for their families and for all the inhabitants of the domus, therefore also the servants and slaves; a description of what the cures could have been comes from Cato in his De Medicina domestica.
If it is certain that the practice of medicine was still empirical it is also true that in Rome at the end of the third century. B.C. it was practiced mostly by Greek doctors whom many Romans did not trust and others like Cato were really hostile to him, believing that with their practices they intended to kill all the Romans. These Greeks who practiced medicine in Rome had arrived in Rome as slaves and were not always reliable. The Greek medicus Arcagatus who arrived in Rome in 219 BC. , says Pliny in his Naturalis Historia, he was very popular and appreciated to the point that he was granted Roman citizenship and the state bought a taberna for him at the Compitum Acilii where he could carry out his "art" as a surgeon. However, it seems that Arcagatus got carried away by cutting and burning so much that he was nicknamed "the executioner" and ended up falling into disgrace.
One of the most important doctors in Rome was certainly Galen who, after being the doctor of the Pergamon Amphitheater, moved to Rome where he was successful and his medicine spread widely. Galen had an excellent knowledge of medicinal herbs and introduced, for example, the use of willow bark as a pain reliever and laudanum (opium tincture) as an anesthetic.
Other recipes were not as effective but helped to expand the treatments with herbs and it was in the tabernae medicae that medicines, infusions and poultices, but also ointmentswere produced, and for this activity the doctor had helpers who had various tasks. There were the rhizotomes, experts in the collection of herbs, the pharmacotribs or pharmacoteuts who, following the indications of the medicus, prepared the medicines and ointments, the pharmacopolies, simple employees in the sale of medicines ...