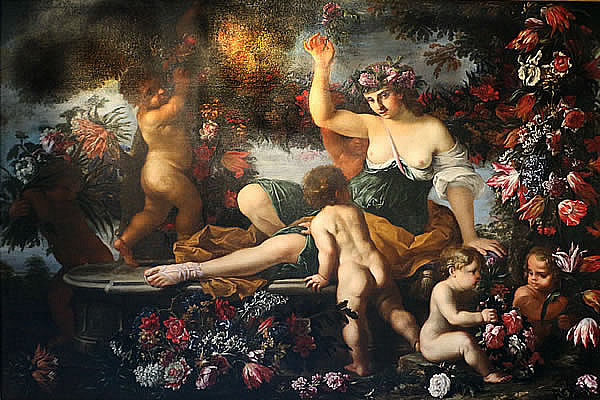 There is a narrow road that, parallel to "Via del Corso", takes us back to Rome in the eighteenth century and the atmosphere that reigns in it refers to aesthetic pleasures from which the name of the character to whom it is entitled is not exempt: "Marius , Pictor Romanus, vulgo Mario de 'Fiori ", or Mario de' Fiori, the eighteenth century painter who loved to paint flowers.
Who thinks that such a particular name can only be conquered is right: Mario de 'Fiori is considered the progenitor painter of all the artists who portray flowers but in reality his name was Mario Nuzzi and he was a pupil of his uncle Tommaso Salini, master from the Caravaggesque school specializing in floral still lifes.
In Rome at the end of the 16th century there was great interest in scientific experimentation, the study of botany was spreading and many artists dedicated themselves to the drawing and illustration of flowers and plants.
Mario Nuzzi was a great friend of the botanist Cassiano del Pozzo acquiring remarkable knowledge of plants and flowers, so much so that he was commissioned to illustrate the "De florum cultura" of Giovan Battista Ferrari. He was a highly regarded artist in his time and had important clients such as the Barberini, the Chigi and the nobles of the Roman aristocracy who often gave as a gift paintings made by Mario De 'Fiori to the diplomats of France and Spain so that the fame of the painter was extended also in Europe. His success was such that he was also admitted to the Accademia di San Luca, the art group founded by Zuccari of which were part also Bernini and Domenichino.
Overthe years, he would create many paintings and became very wealthy, died at 70 and was buried in the church of San Lorenzo in Lucina. The road was dedicated to him because he lived here, at number 93, after his second marriage.
In 1810 Giuseppe Gioacchino Belli also lived there for about three years when he was secretary of the rich Polish prince Poniatowski; He remained in the Palace of the Prince of Poland until they came into conflict with Costanza Luci, already partner of the nobleman, and he had to leave.
Other stories that evoke romantic atmospheres are linked to the Palace of Prince Poniatowski. The building, on the corner of Via Mario De 'Fiori and Via della Croce has its entrance at no. 81 of the latter, and when the prince moved to Florence and sold the palace, this was divided into apartments and on the ground floor some stalls were obtained and besides also other rooms that were rented.
In 1833 a premise was opened in the inner courtyard where you could have breakfast, eat and drink until late in the evening. The tavern came into the history of Rome in February 1867 because here gathered 10 scions of aristocratic families - Carpegna, Lovatelli, Santasilia Column Boncompagni, Doria, Odescalchi and Ruspoli - to prepare the insurrection in Rome but made the mistake of raising glasses to Rome as the capital of Italy, which cost exile to many of them. A few months later, the tavern became the meeting place of the Roman conspirators, from the Cairoli brothers, who will die in Villa Glori, to Giovanni Cadolini who will become the first President of the Chamber of Deputies of the Kingdom of Italy.
From 1853 to 1857 he resided in via Mario de 'Fiori, n. 48 also Stefano Lecchi considered one of the first Italian photographers to whom we owe the whole series of images related to the clashes of the Roman Republic.
Other painters and artists lived in Via Mario de’ Fiori and among them is Giorgio De Chirico who lived in a corner apartment of Via delle Carrozze. The painter recounts in his autobiography how in 1945 the street was known above all "for the large number of tolerance houses, or tea houses or brothels, however it may be called".
In the home-studio De Chirico worked a lot and there he painted many portraits such as what he himself remembers "of a Brazilian lady who was named Fonseca by surname and was the wife of a secretary of the Brazilian Embassy to the Holy See".
After seeing the Spanish Steps or walking through the shopping streets like Via Frattina and Via Condotti, walking down Via Mario de 'Fiori is like taking a trip back in time, in a romantic street where, still fifty years ago, you could hear the hooves of Prince Torlonia's horses returning to the stables after the morning walk in the avenues of Villa Borghese.