Lapis scandali: the stone of scandal 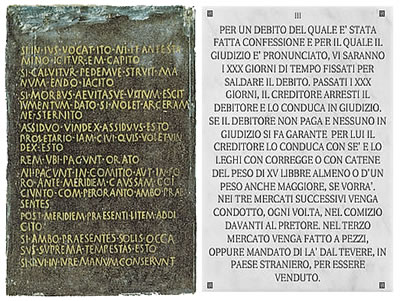 There was a stone in front of the major port of the Capitolium on which was depicted a lion and where they were going to sit the men who had failed and had to leave their assets to creditors.
The facts took place in a ritual for which bankrupts were going up to Capitoline Hill and arrived in front of the stone were shouting the debtors "Cedo Bona" or abandoning my goods and then had to let himself fall flapping his bare buttocks on the stone; after performing this ritual the creditors could no longer pursue their debtors.
The stone was called "Lapis scandali" or stone of scandal, for those who would sit as bankrupt he was losing its credibility and could not testify in court.
This sentence seems to have been introduced by Julius Caesar after it had been abolished the article which, in the XII Tables of the Law, authorized the creditors to kill or cut off pieces or enslaving debtors and sell them to recover their money.
From the first century A.D. then in Rome the punishment for bad debtors was "bonorum cessio culo nudo super lapidem" (transfer of assets by bare buttocks on a stone), but this punishment remained in force even at different times and in other cities.
In the Renaissance Florence the penalty was fine imposed on the merchants who do not honor their commitments and failed, the ritual was very similar to the Roman one. The penalty was imposed in public, in the Loggia dei Mercanti where, in the ground, there was a round of two-tone white and green marble, visible even today, and where the condemneds chained and with your pants down, according to the statute of the Merchants, were made beat with the bare buttocks on the so-called "stone of the scandal".

From this humiliating practice they would be born of idiomatic expressions like "being with your ass on the ground" and italian word "sculo" (ass over tit) expression understood as misfortune.
Even in Modena there is a stone called "Preda Arringatora", on which the debtors had to sit down to stripped behinds shouting three times "cedo bonis = I surrender performing"; this stone was also used to expose the bodies of executed prisoners and ultimately was the stage on which we wanted to do a saliva public speech, was the stone of the speeches from which is derived the current name.
From the ancient Roman punishment comes the idiom "to be the cause of the scandal" that entered the language spoken in many languages both neo-Latin that Anglo-Saxon ; in the opinion of linguists, the phrase derives not so much from Roman law but from a text of the Gospel according to John that recounts the stoning of an adulterous wife.
It should be more careful analysis of the times, laws and the spoken language to understand the origin of the phrase; What is certain is that when in Rome and all over the empire debtors paid their sentences slamming the buttocks on the stone of the scandal, John had not yet been able to write his Gospel.