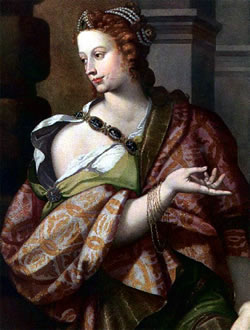 She was the third wife of Nero: Statilia was born in Rome in 35 BC, she was descended from Tito Statilius Taurus who had built Statilius Theatre in Campus Martius and was the daughter of Tito Statilius Taurus Corvino, consul in 45 AD during the reign of Claudius. The gens Statilia was rich and had vast estates in the east of the Esquiline, but they were also followers of a sect devoted to Neo-Pythagorean mystery cults, they to celebrate their rites built an underground basilica (found in 1917 and now open); cults neo-Pythagoreans had a spread elitist and were often confused with witchcraft so that Nero's mother, Agrippina, publicly accused in 53 AD Statilius Tauro of witchcraft and forced him to commit suicide.
Tacitus in the Annales says that Nero had been the lover of Messalina Statilia before she married Vestinus Atticus, her fourth husband. It don’t know the name of previous husbands, or if she had any children.

The statues and effigies of Statilia Messalina are few but the descriptions that historians give about her are sometimes conflicting; some people reported that it was very beautiful and other ones that although acknowledging a lively considered her less attractive of previous wives of Nero.
Statilia Messalina was the lover of Nero even before she married her fourth husband, and when Nero had married Poppea. It is unknown why Vestinus, the actual consul of 65 AD, married Statilia Messalina but the fact did not please Nerone Nero and Vestinus was been friends before 65 AD, but probably Vestinus did not like some of the decisions and behavior of Nero and just when he became consul began to show publicly contempt Nero spared of jokes during the entertainments even.
As it told by Tacitus in the Annals, in the fierce and creeping clash between the two intruded even marriage of Vestinus and Statilia Messalina of which was well known the relationship with Nero; since that time Nero began to seek ways to eliminate Vestinus. He took the opportunity with the conspiracy of Piso, who probably had not acquired Vestinus to his cause especially because many of the conspirators did not trust him for the his character and perhaps even more for the previous links with Nero

Nero does not find someone among the informers that made the name of Vestinus and so he said that the consul was preparing legions with his slaves to overthrow him; then he sent tribune Gerelanus get him in his palace but Vestinus preferred to commit suicide. He left the banquet and his friends, sent for the medicus who opened his veins, he plunged into a warm bath and awaited death.
That same year Poppea Sabina died in Oplontis also, for the consequences of a kick on the belly gave Nero gave her in an access of rage, while she was pregnant.
In September of 66 AD, Nero could marry Statilia Messalina who became the his third wife. The new Empress was already on the side of Nero when he received the submission of Tiridates II king of Armenia and soon after they left for Greece with a huge following.
Statilia Messalina became even part of the Olympus family of Nero, and it was during the trip to Greece that the new empress, with the decree of the Akraiphiai, raised in Augusta and Nero ordered that a statue was erected in the local Temple of Apollo Ptoios.

When they returned to Rome, Statilia perhaps had a life separate from that one of Nero and seems to love the arts and literature; according to some historians (Comparetti) would be she the pedantic woman, referred to by Juvenal, who "in the middle of a circle of grammarians and rhetoricians, was with much calmness and great flood of words the literary matters most in vogue; she spoke of Dido, weighed and compared the value of Virgil and Homer":

In the last days of Nero was only at Horti Serviliani before and then in Villa Faonte where he committed suicide on 9 June of 68 AD.
After Nero's death, no magistrate was vented against her that had left the emperor for a few months already; again, she failed even of his funeral that he thought the freedwoman Atte.
There not have much news of her; historians tell us that the emperor Otho asked her to marry him but she refused; we do not have some other news
According to some chronicles, rear, lived a long life wealthy and peaceful devoting himself to the "culture and eloquence" and, even affected indirectly by damnatio memoriae - as witnessed epigraph, found in Beotia, commemorating the independence that Nero granted to Greece, where her name is cancelled such as Nero - it had continue to be referred to her as Messalina uxor Neronis as evidenced by the inscriptions of the Columbarium of servants and freedmen of the gens Statilia found in the nineteenth century on the Esquiline.