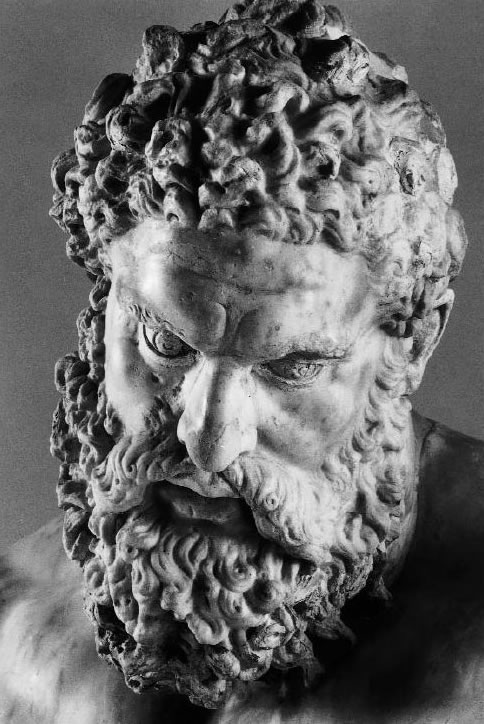 During the long years in which the Farnese property on the Palatine Hill was affected by the construction of the Villa and then again in the arrangement of the Horti, a large amount of marble masterpieces of antiquity was found and could not have been otherwise since the Palatine had been the hill where the emperors of Rome resided. These works formed what is now known as the Farnese Collection that the powerful family began with the intent of making a collection that can be kept in their palaces but also to be shown as a sign of their power.
The collection and restoration of the antiquities found was started by Alessandro Farnese who will become pope with the name of Paolo III (1543-1549) and, after him, the family continued to collect the marbles that were gradually found until the moment of maximum splendor when about 300 pieces were counted.
Probably they were more because of some marbles it is known with certainty that they were stolen, however most of them remained to the Farnese family and in their palaces until it was inherited by Charles III of Bourbon who was the son of Elizabeth Farnese of Parma.
Charles III brought to Naples what of the collection was in Parma and then his son Ferdinand IV decided to bring the statues preserved in the Roman Palaces to Naples; at the beginning of the 19th century Palazzo Farnese, Villa Farnesina alla Lungara, Villa Madama on the slopes of Monte Mario, the Horti Farnesiani and also Palazzo Farnese in Caprarola were emptied.
The most substantial part of the Farnese Collection can be admired today at the National Archaeological Museum of Naples where the works are exhibited according to a path that follows the criteria of late Renaissance collecting, but true understanding cannot be separated from the knowledge of the facts related to the interventions of restoration.
Even the last of the uninitiated will have wondered how the so-called "Marble Mountain", the Toro Farnese, with its size of m. 3.70 in height and m. 2.95 wide, or the gigantic Ercole Farnese high m. 3.17: in fact they were not intact.
Most of the statues found in the sixteenth century were restored not only and not so much for aesthetic purposes as to "give them full meaning" and not even the statues of the Farnese collection were subtracted from this trend, with the sole exception of the sitting torso of Dionysius, of which no completion was ever attempted.
The "Bull" and the "Hercules" were found in 1546 during the excavations at the Baths of Caracalla; when the statue of Hercules was found, a Roman copy of the third century. A.D. from one in bronze by Lysippus, the calves were missing and then Alessandro Farnese entrusted the construction to Giacomo della Porta, one of Michelangelo's pupils.
The statue was thus restored to its integrity at least until the nineteenth century when, during further excavations, the original calves were found and it was decided to recompose the stua with the original parts; today at the Archaeological Museum of Naples it is possible to see the additions made by Della Porta near the large statue.
But this is not the only statue of Hercules of the Farnese family, in fact in the same excavation another gigantic one was also found, known as "Ercole Latino", now located in the Hall of Honor of the Royal Palace of Caserta.
For many years this statue was considered a copy made by a certain Andrea Violani, commissioned by Vanvitelli to make a copy of the Farnese Hercules - that was (at that time) in Capodimonte and of that many copies of reduced size in plaster , terracotta and marble already existed- probably with the intention of using it to embellish one of the many halls of the Reggia. A careful observation proves that the Hercules of Caserta is not a copy of the better known Farnese Hercules: the iconography is completely different, the support of the legs is different, the lion's skin is different, the position of the left arm is different, the head reclined to the left is different ...