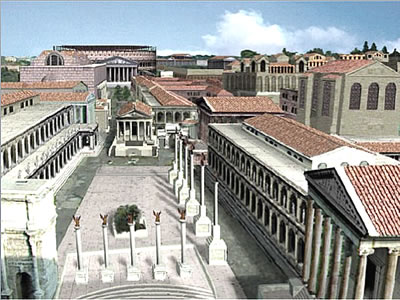 Already starting from Tarquinius Priscus times along the Via Sacra were built porticus on which opened tabernae where were selling the most varied goods; in the V century BC in the Forum were opened tabernae for the sale of meat coming in from nearby Foro Boario: it was from the counter of a butcher that the father of Virginia took the knife by which killed her near Sacellum Cloacinae. At the end of the IV century BC There it was a big change: Gaius Menius, who defeated the Samnites washing the shame of Caudine Forks, he decided to make improvements to the Forum and built some elevations on tabernae surrounding the large central area of the Forum where took place then the Ludus Gladiatores so there were more places for spectators.
The construction of the galleries over the tabernae happened parallel the expulsion of the forum of the sellers of food, in fact, it was thought that for the forensis dignitas it was necessary to convert the shops from lanienae in argentariae, from butcheries in currency exchange counters, money lenders and bankers, doing thereby becoming the Forum also in the real square affairs until the Empire ending. The big change is completed when the Basilica Sempronia was replaced by Basilica Julia, in the I century BC. Since then tabernae with ordinary goods there were along the Vicus Jugarius and Vicus Tuscus where the butchers shops are mingled with the artisans ones.
Along the Via Sacra during the imperial age tabernae exposed the most valuable goods: gold, silver, pearls and precious stones, flavors and spices, fruits and vegetables refined and exotic foods, musical instruments, books, crowns of flowers.
Surely to maintain dignitas along the Via Sacra agreed large families owning of the basilicas where they were tabernae; tabernae in the Via Sacra were controlled by the gens Aemilia, the gens Julia and gens Domitia, three families that just during the rule of Augustus created strong ties of kinship.
The gens Aemilia was the owner of the basilica built in the late III century B.C., and even devastated several times by fires it was always restored (the last restoration dates back to the IV century A.D.); just during the rule of Augustus it was expanded the number of tabernae with the construction, in the space between the basilica and the Via Sacra, of the Porticus Gaii et Lucii.
The construction of the basilica of Julia gens had been commissioned by Julius Caesar but was finished by Octavianus who made it the most beautiful, rich and great basilica at that time. The gens Domitia when he built his domus on the slopes of the Palatine (first century BC), was also built on the front towards the Via Sacra a great horreum, a commercial building 60 meters long that had two levels above ground and one underground floor where had been obtained seven underground rooms that, almost certainly, they were used as warehouses for valuable goods ...