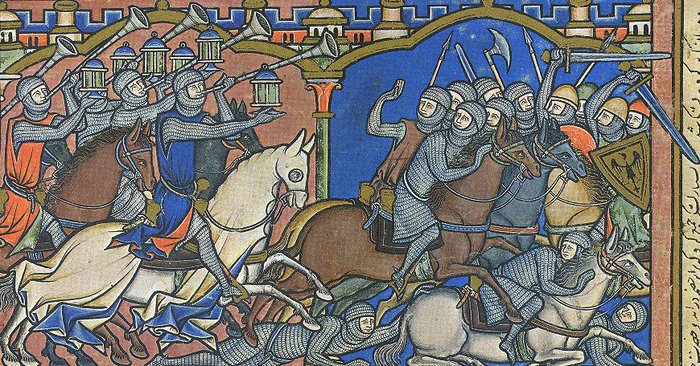 During the period of clashes between the Papacy and the Empire, the battles involved Rome several times; the militias that supported the emperors had taken the city and appointed an antipope and to put things right the pope called Robert the Guiscard whose army made up of Normans and mercenaries set the city on fire; there was a fire that lasted three days and destroyed everything there was between the Lateran and Campus Martius.
The year was 1084; Henry IV had been excommunicated for the second time by Pope Gregory VII who came to lay him in a confrontation without exclusion of blows and retaliation for which Henry IV convened an assembly of faithful bishops who deposed Gregory and appointed the antipope Clement III. Gregory VII closed himself in Castel Sant'Angelo and asked for help from the Norman king of Naples, Robert the Guiscard.
During the sack of Rome in 1084 the troops of Robert the Guiscard were not only Normans but also Muslim and Byzantine; they were the mercenary militias of the Altavilla who, with great diplomatic ability, managed to catalyze the warrior forces present in Sicily in southern Italy.
The Altavillas, after the conquest of Sicily, opened their army to Muslim militias to whom they did not ask to convert to Christianity but on the contrary, as Eadamero tells, Roger I had expressly forbidden the Muslim militias of his army to convert to Christianity. Muslim militias had particular advantages for the Altavillas, since they were completely dependent on their personal favor and, in the event of military operations against the state of the Church, they were not subject to any excommunications by the Pope.
On May 21, called by Pope Gregory VII barricaded in St. Angel Castle after the emperor Henry IV was crowned by his anti-Pope Clement III, Robert presented himself under the walls of Rome with an army of 36,000 men. His army had easily walked the Via Appia and passed the walls had traveled the road that went from the Lateran to the Colosseum and then along the Via Recta arrived to Saint Angel Castle. The Knights of Robert Guiscard, were more than 36,000 Normans and Saracens, entered from Porta San Lorenzo and proceeding from the Lateran went down fighting and damaging everything met but their fury was unleashed when they realized that very little was left in Rome after the passage of the Germanic soldiers of Henry IV.
They arrived as liberators but the clashes were not so exhausting because Henry's German militias, after having remained in Rome for the whole winter, had largely left her, taking away everything they could; the liberating army found itself in front of a city already plundered, and then anger led to devastation and gruesome violence. The Muslims shooting up Rome which burned down from the Lateran to Field of Mars; what was saved by the Visigoths and the Vandals was destroyed by Robert's army.
The ranks that penetrated that day in Rome with the battle cry Guiscard! Guiscard! however, they had neither pope nor emperor in mind: they sacked and destroyed everything they found: still twenty years later Ildebrand of Tours spoke of Rome as a desert strewn with ruins.
Even the Vatican wasn't save and, on the contrary the Normans also took the Treasury of Saint Peter taking away what had been donated in the two centuries that had passed since the raid of the Saracens of 846.
Some buildings were in such conditions that it was preferred to cover and build them up as happened to the Church of San Clemente; but the basilicas of SS. Quattro Coronati and of SS. Giovanni e Paolo were also destroyed. Precisely in that area where more than elsewhere the Guiscard troops raged, today there is a street named after them Via dei Normanni.