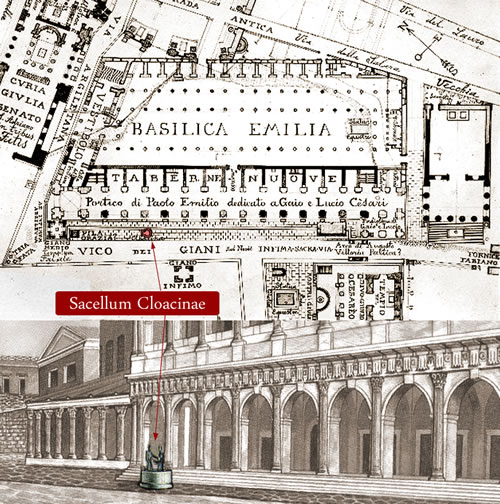 Legend has it that the Romans and the Sabines, after the battle of Lacus Curtius decided to unite the two peoples, and laid down their arms, purified themselves with myrtle twigs; in the place where the two armies celebrated the rite of purification it was then erected a small altar dedicated to Venus, the goddess of Rome, which here took the name of Cloacina; the etymology of the word is connected to cluere verb meaning purify.
According to the Roman historians dedication to Cloacina Goddess it seems to have been intended right from the Sabine king Titus Tatius much that, St. Augustine in his De Civitate recuperating from Seneca, writes:

Tatius dedicated a temple to the goddess Cloacina, Romulus to Picus and Tiberinus

Romans and Sabines shared the ritual dedicating it to their water deity: the Cloacina goddess was the goddess of the waters of the Sabines and the Romans had the God Tiber who presided over the waters and Pico that reigned on forests. After the encounter with greek culture and panthe , not all ancient gods survived and if Picus was relegated in ancestral myth and Tiber had a subsidiary position, Cloacina became an appellative which passed to the goddess Venus born from the water.
The legendary history of Rome has it that it was Enea to bring the cult of Venus in its many forms in Lanuvio and then in Rome as Servius told also explaining how the Venus of Cyprus would have had form of omphalos :
“… Cloacina … Cluilia … Myrica, Myrtea …….est et Erycina quam Aeneas secum advexit … Verticordia, Militaris, Limnesia apud Cyprios Venus in modum Umbelici vel, ut quidam volunt, metae colitur”
The ancient cult of the Sabine goddess of purification is intertwined with that of Cyprus Venus and the purification rituals are held at a votive well where the myrtle impure became is thrown in the waters that take away the evils and the dirt from the body and spirit : the Cloaca Maxima, the largest underground canal built by Tarquinius Priscus to reclaim the Forum.
These are the origins of one of the first symbolic sites, in more than a thousand years of Roman history, has remained in the same place while around changing urban planning of the Forum and new buildings were in addition or to replace older.
During the centuries remained buried under meters of earth and the remains of Sacellum Cloacinae were found during archaeological excavations in 1899 at the point that was indicated by the literary sources: from the Basilica Emilia and and the Via Sacra near the Comitium, at the point where the Cloaca Maxima enters in the Roman Forum purifying it of stagnant water that had characterized the area in archaic times ...