The Rotunda by the sea of Ostia 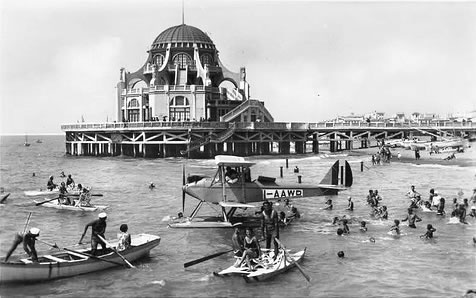 At the end of the eighteenth century in Brighton, the favorite holiday resort of the English nobility, a therapeutic center was built which, to exploit the benefits of the marine environment, had the particularity of being built in the water with a long walkway that connected it to the mainland. This type of establishment soon spread throughout Europe. The first example of Rotunda in Italy can be considered the one designed in 1782 by Vanvitelli, a stilt house in Monte di Procida on Lake of Fusaro.
The roundabouts made in modern age in Italy were a dozen and built in the years at the turn of the 1900s and among these the best known are the Art Nouveau Rotunda of Mondello beach in Palermo and the pure rationalist roundabout realized in 1910 in Senigallia, while in the '30s it was then the turn of that one of Chiavari built on the cliff. In 1925 the architect Giovan Battista Milani designed the “Rotonda di Ostia” that was perhaps the largest in Italy but had a very short life.
These buildings in Italy were called "Rotundas by the sea" and were successful not as a therapy center but as a place for meetings and entertainment.
Unfortunately, the destiny of these dream constructions is linked to the trend of the tides and to advance and retreat of the sea, for these reasons in fact the rotunda of Rimini is now on the beach, but the Rotunda of Ostia had a sadder end: it was blown up by the Germans in 1943 during the Second World War.
The Rotunda was one of the two buildings of the "Stabilimento Balneare Roma", the largest bathing establishment in Italy, a summer gathering place for high society, and it was connected to the beach by a pier 64 m long and wide 6. The "Panettone", as the building was called because of the form that referred to a style to say the least "eclectic", was inaugurated in 1924 in coincidence with the opening of the Rome-Ostia railway line. It had two levels: at the first was the restaurant in a 12 m central round room. about in diameter, all around other rooms that opened onto the terraces overlooking the sea; on the second level there was a party room that was 24 meters in diameter.
The building can be considered emblematic of the early twentieth century, in its essence and in history, for Rome and for Roman architecture. Its realization was entrusted to Giovanni Battista Milani, one of the first teachers of the School of Architecture of Rome around which architects such as Fasolo, Foschini, Aschieri, Minnucci, Luccichenti, Fariello, Nervi, Ridolfi were formed, or the school of Italian rationalism . He was the first convinced supporter of new construction technologies, first of all of the "reinforced concrete" and of the new architectural language deriving from it. Milani was obsessed by stability problems of buildings but had to be solved within the traditional aesthetic canons: in this sense surely the Rotunda of Ostia was his experiment more multivariate.
To keep light the structure, Milani used innovative materials for the time: a reinforced concrete structure and perforated brick infills; the dome of the upper hall was built with an iron structure covered inside in wood and outside with copper sheets.
The interiors were in a style close to the Art Decò and very exclusive as can be seen from the photograph depicting the restaurant hall.
The complex became one of the main centers of the social life of the coast and of the capital itself, as dancing parties, cultural and musical events, beauty contests, nautical competitions and even fashion shows and even meetings of clandestine lovers took place, it seems that the first meeting between Claretta Petacci and Benito Mussolini took place at the Rotonda di Ostia in April 1932.
In December 1943, the Rotunda, the Ostia wharf and the Railway Station were detonated by the Germans to eliminate the structures that could be used by the Allies for logistics.
Today the City of Rome wants to build a suspended structure that can host cultural, sporting and commercial events; an international call for tenders will be announced for the new Rotunda project.