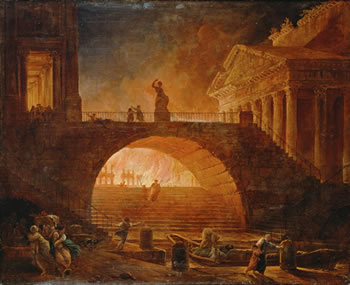 The night of July 18 of A.D. 64 a fire broke out at the Circus Maximus, are unknown reasons, it is supposed to be powered with the goods that were in tabernae that faced toward the Palatine Hill.
The vigiles were unable to reach the front of the fire because hampered by people trying to escape, and also many of the water accesses were blocked; fire fueled by strong winds from the west moved to the Palatine, the Caelius and Oppius Hill.
When the fire attacked the Palatine Hill, the Imperial Palaces went to fire and also the Transitory Palace, Nero's Domus where he art lover had collected countless works of art that were irretrievably lost; the emperor at that time was at Anzio, and upon receiving the news soon returned to Rome to organize the defensive actions and relief efforts.
When the emperor arrived in Rome, the Palatine and the Caelius were completely on fire and you could only stop the advance of the flames, to this purpose the buildings on the slopes of the Hill Oppius were demolished to save the Esquiline.
Rome in A.D. 64 had approximately 1,300,000 inhabitants mostly huddled in the insulae, in the fire burned nearly 4,000 of these and in some the vigiles failed to arrive; the deads were thousands and tens of thousands homeless; to accommodate people who had escaped from the fire and had lost their houses, over 200,000 people, Nero did open the Agrippa gardens in Campus Martius where the barracks were also built as temporary housing and, in addition, as noted by Tacitus "they were transported useful objects from Ostia and neighboring municipalities, and it was reduced the price of wheat to three gold ",
Six days later it seemed that the fire had stopped but other insulated fires flared up in the city, one of which broke out in the gardens of the domus of Tigellinus, the prefect of the Praetorian Guard and adviser of Nero, hit "Golden Square Mile" of Rome where he lived the Empire aristocracy, without touching the popular quarters. The fire blazed up for strength and shooting other three days; was an unequal struggle, Rome burned for nine days and at the end of the fourteen districts in which was divided Rome only three will not be touched by fire: Transtiberim, the Tiber Island and the neighborhoods beyond the Tiber, Circus Flaminius, the Regio which included the southern area of the Campus Martius, Via Lata, at the sides of Flaminia consular road that ran between the districts that arrived until Collis Hortularum.
During the days when the fire devoured Rome, neighborhood after neighborhood, Nero drew their personal property to bring the first assistance to the enormous crowd remained homeless and he did his utmost also personally turning the streets by night and by day, and sometimes even without the usual escort; historians recognize that in those days Nero acted as a true leader who helps and assists his people so that there is also an anecdote according to which at night the emperor turned the ruins still smoldering to search for survivors.
At the end of the nine three Regio were completely burnt: the III Isis and Serapides, the IX Circus Maximus and the X Palatine, eight others were seriously damaged ...