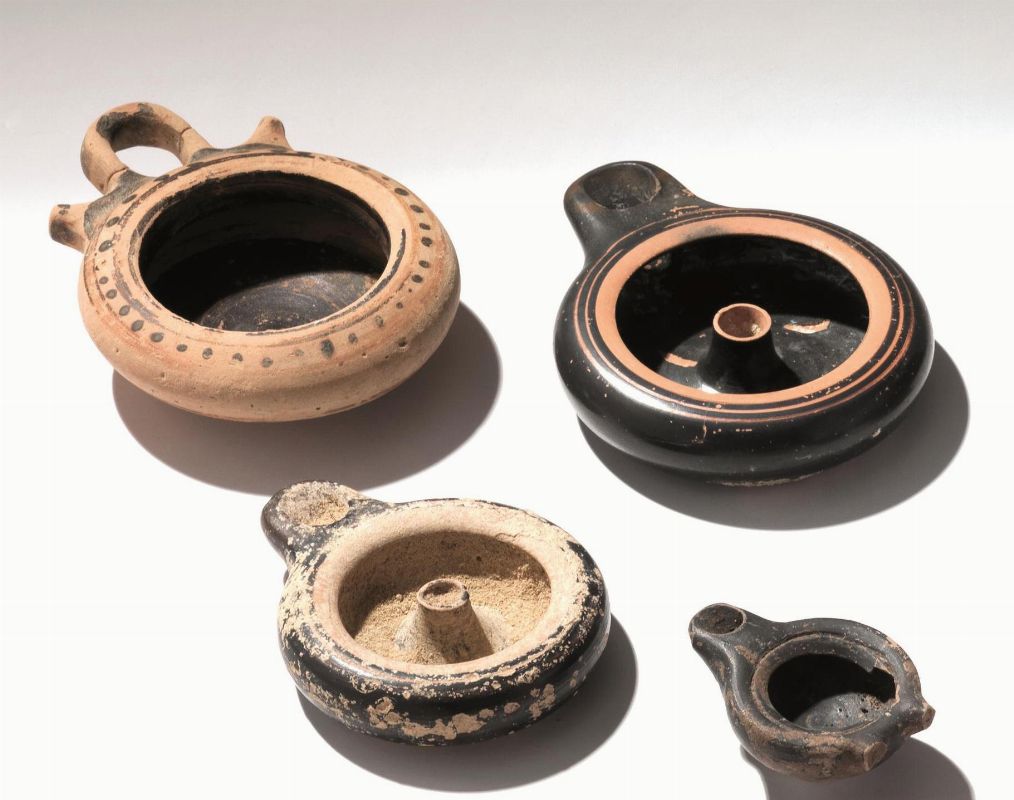 The lamp is the first real technological tool used by man to illuminate and the first known examples date back to the second millennium BC; they were simple bowls filled with oil and with the wick resting on the rim. Over the centuries, the instrumentum underwent a notable evolution of technical characteristics such as the waterproofing of materials, such as terracotta and ceramic, or the application of a loop to handle it better, but also aesthetic according to the tastes of peoples and different geographical areas.
The oil lamps that were widespread in Rome in archaic times came from the East; only in the third century. B.C. some workshops began to operate in Campania and Rome from which two types of lamps came out: cylindrical tank lamps and biconical tank lamps. After these very simple types, in the first century B.C., artisans began to produce the so-called "beaded" oil lamps because they were decorated with rounds of dots on the edges.
The production centers of oil lamps from the first century. A.D. onwards they are located in Lazio, Campania and in the Po Valley which, at least until the middle of the century, also sell their products in the provinces.
At the end of the century trade with the north, where local productions had begun, thinned out.
A differentiation of the types of lamps produced also begins, and in the Po Valley spreads the canal lamp called firmalampen, which will also be widely sold in the Danubian regions and in the Rhineland; in these lamps on the bottom was imprinted a mark that allows to trace both the place and the factory of production.
These lamps, which can be defined as an advanced model, combined the high quality of the materials with a formal simplicity that facilitated production in large quantities and transport; they are also known as Fortis lamp from the name of Lucius Aemilius Fortis, owner of a factory in the territory of Mutina (Modena) who was the largest producer and exporter and whose factory remained in business for about two centuries.
These lamps were not used to illuminate homes only ; in fact, in Pompeii along the Via towards Stabia in seven hundred meters about 500 ones were found, demonstrating that in Ancient Rome the most important streets were illuminated. The maintenance of this ancient street lamps in imperial Rome was entrusted to the vigiles sebaciarii, assigned precisely to the supply of torches and oil lamps.
The function that the lamps had in religious rites was also very important, especially in processions; Apuleius tells in the Metamorphoses (XI, 9) of a large gold lamp in the shape of a ship that was used during the nocturnal procession of the Navigium Isis. A terracotta specimen similar to the one described by Apuleius was found in Ancient town of Ostia and dates back to the 1st century AD.
Suetonius in describing the pomp of the triumph celebrated by Julius Caesar for the conquest of Gaul, recalls that the procession did not stop even for the coming of the night and that he was able to go up to the Temple of Jupiter Optimus Maximus (Suetonius, Caesar XXXVI, 1)

ad lumina quadraginta elephantis dextra sinistraque lychnuchos gestantibus
by the light of the torches that forty elephants, to the right and to the left, carried on the candlesticks.

Another important function, exclusively symbolic, was that of the oil lamps that were left inside the tombs and of which Giovan Battista Piranesi left us many drawings.
The oil lamps were left in the tombs as a symbol of life and as a guide for the deceased to the realm of the dead. In some women's graves, oil lamps were left in which erotic scenes were represented; some scholars are of the opinion that the erotic scene imprinted on the lamp was a symbolic representation of life which, precisely in sexuality, had one of its strongest manifestations.
Among the many uses of oil lamps there was also that as a strenae, or a gift of good luck, up to that of gadgets in events; like the oil lamps that were distributed to the spectators of theatrical performances.
Moreover, the oil lamps were a formidable instrument of political propaganda and their decorations were direct and easy messages to understand; the heroes of the day were celebrated by imprinting their name but also the great events such as the Ludi Saeculares, in fact for those announced by Septimius Severus in 204 AD. many were produced with the SAECVL inscription (found mainly in Italy).