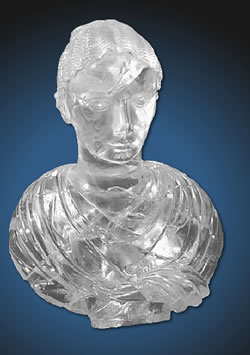 Rock crystal stone was consecrated to Juno because among its many powers was to channel the positive energy and bring out the capabilities of each.
Rock crystal had in Roman times a very high value. Important criteria for assessing the rock crystal were naturally the transparency and the absence of inclusions; if the crystals were not always perfectly clear they were used to make objects artfully worked with decorations that dissembled impurities, it preferred not to decorate those without defects; the maximum value was by absolute transparency, the most popular must have the color of the clear water.
The hyaline quartz, from the greek Krystallos yalos or transparent crystal, is a type of quartz completely colorless and should be perfectly transparent in order to merit the name of rock crystal.
Rock crystal, among the Julio-Claudian and the Severian age, was used for precious sculptures and had a very high commercial value; Pliny provides news of a trulla (pitcher for wine with the handle) made in a single block of rock crystal that had been paid the astronomical sum of 150.000 sesterces and also of a rock crystal block weighing 48 kilos that Livia offered as a a votive gift in the Capitolium.
Rock crystal was considered worthy of imperial rank because once it was broken not repairable as explained by Pliny in his Naturalis Historia: crystallina, quorum accendit fragilitas pretium fragmenta sarciri nullomodo queunt ; cups and glasses were also made for emperors, it seems that both Nero and Lucius Verus used crystal goblets.
o underline the importance that was attributed to rock crystal is its use in the symbols of power as the imperial scepter found during an excavation in a site in the suburbs of Rome. The scepter is of the type scipio eburneo (what according to Dionysius of Halicarnassus was introduced in Rome by Tarquinius Priscus) that was short made by bone/ivory and surmounted with an eagle. The scipio eburneo in the Republican era was held in the hand by the winner during the Triumph while in the imperial age were the Consul or the Emperor who used it for the proclamation of circensis pump and dictate the times; an example of this type is the scepter that is in the Museum of Villa Giulia, consisting of two cylinders made of bone joined by a rock crystal ring, all surmounted by an eagle's head in caldedonia worked in the round.
But the goldsmiths of ancient Rome also did some wonderful jewelry rock crystal, including one of the most beautiful is the one known as Carvilius Ring. The ring represents a curly-haired young eighteen old, Carviliu Gemellus, who died poisoned with arsenic and whose body was found in a hypogeum in Grottaferrata near Rome.
The ring depicts the young Carvilius and carried it the mother, Ebuzia, to remember that son died too soon; Ebuzia died years after his son and was buried next to him in the tomb known as "Tomb of garlands" because both bodies, found in their coffins were adorned with garlands of violets, roses and lilies because both died on the summer beginning ...