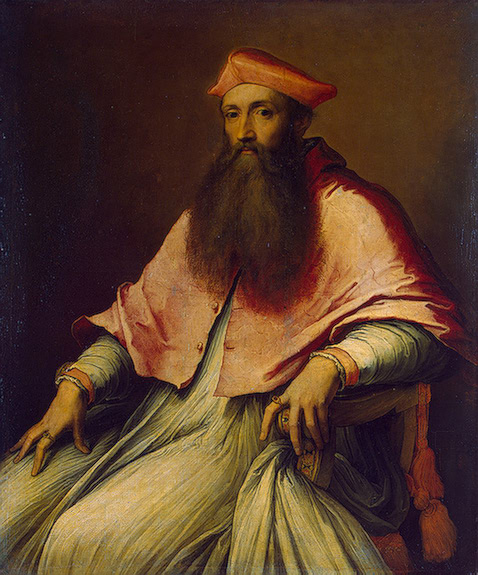 Reginal Pole was an important and unique figure of prelate and politician who, if he had become Pope , he could change the history of the Christian Church and, perhaps, of the West. The Cardinal stayed for a long time in Italy and in Rome he was also Deacon of Santa Maria in Cosmedin, but very important was his diplomatic action with he tried to bring the Church of England back into the papacy orbit; with the protection of Queen Mary, he was the last Catholic archbishop of Canterbury.
Cardinal Reginal Pole was linked by close ties of kinship with the royal family; he descended from the Plantagenets because his mother was the nephew of two kings, Edward IV and Richard III, and this made him one of the closest relatives of Enrivo VIII who protected him and wanted to pay his education.
He spent his formative years between Paris and Rome and was always opposed to the separation of the English Church from Rome, thereby entering into conflict with Henry VIII. In 1535 in England he was thought of as the possible husband of Maria Tudor, daughter of Henry and Catherine, but in 1536 Pope Paul III made him Cardinal and papal legate in England.
His family as he had opposed the schism of England and so his brothers and his mother were among the opponents executed by Henry VIII, even the Cardinal risked being killed by the assassins and sought refuge in Toledo where Charles V refused to hand it over to English ambassador.
In 1539 assassins sent by Henry VIII arrived in Rome who ambushed the cardinal along the Via Appia at the intersection with the Vicolo della Caffarelletta, near the entrance to the Catacombs of San Callisto. Concurrent circumstances allowed Reginald Pole to save himself so that, just like the ancient Romans, he wanted to build a chapel to thank God for letting the assassins escape him just at the point where the ambush was set for him. The chapel is an elegant round dome-shaped kiosk in polychrome terracotta (yellow and red) which recalls the model of the Roman temple tombs.
The Cardinal was an important protagonist of the events of the sixteenth century. After the death of Paul III, in the conclave of 1549 he was the principal candidate and he lacked a single vote and, if he had been more ambitious, he could have accepted to become Pope for adorationem. He preferred not to clash with the French cardinals and was eventually elected Julius III; Pole retired for four years in the convent of Maguzzano on Lake of Garda where he continued his humanistic studies until, after Henry VIII's death, his daughter Mary ascended to the throne. Before dedicating himself to the ecclesiastical career Pole should've been the consort of Mary Tudor, known as Bloody Mary, he was instead her prime minister.
Pole, in 1554, returned to England as the Pope's legate with the task of reconciling the English Church with Rome; he acquitted the Parliament of excommunication and, ordained a priest in 1557, he became Archbishop of Canterbury. But before he could start the rapprochement Pope Julius III died and was replaced by Paul IV Carafa who hated Pole for his reformism and tried to accuse him of heresy, but Queen Mary protected the Cardinal and the Pope had to stop.
The Cardinal died in November 1558, a few hours after the Queen Maria Tudor; open to dialogue and confrontation, far from any dogmatism and ready to question every aspect of the church of which he was, despite doubts and rumors, always a faithful servant.