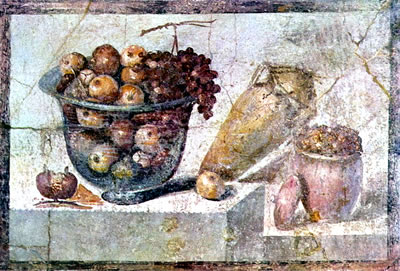 The glass has an ancient history and in ancient Rome was a widespread material both in the simplest jobs than in those "artistic". In the aristocratic domus wine was drunk in glass chalices, the perfumes and theointments were stored in glass containers and windows of the houses had stained glass.
The production of glass up to the first century BC made reference to countries such as Egypt and Syria where as Pliny, according to a legend, it was discovered the glass technology.
There were big changes when the victory of Octavian over Antonio ruled somehow the end of Hellenism or the one that was also called "Asiatica Luxuria" almost a love for all that had of Greek origin, or analogous to that culture; the glass until to that moment was produced using as essential components the natrum carved from a single site, small salt lakes of Wadi an Natrun in Egypt, and the sands of the river Belus (current Nahr Naaman) in Palestine, so the workshops primary production were concentrated in the area of Caesarea in the East while the blocks of vitrified materials were then traded in all other parts of the empire.
At the beginning of the first century. A.D. It was introduced blowing technique that replaced laborious and expensive process of casting and hot forming; at this time also began to be produced colorless glass, sought to achieve better quality objects.
The new technique required the skills of the craftsman and the availability of commodities, so the it spread of itinerant glassmakers phenomenon that moved where there was demand for their products. They began to produce the most different objects and also their quality could be too dissimilar so that the glass objects were accessible to almost everyone.
The large number of objects - cups, jars, little bottles, mirrors, glass - and their fragility encouraged the start of another business that we would not have imagined; in the first century there were "ambulator" that roamed the city trying to get to the broken glass. These activities are witnessed by the words of Statius (A.D. 40-96), "comminutis permutant vitreis gregale sulpur ", and by Martial, "Transtiberinus ambulator, qui pallentia sulpurata permutat vitrei"; the broken glass were bought and paid for with raw sulfur: it was already born on glass recycling.
The small artisans were seeking by the recycled glasses because their processing required a lower melting point with a considerable saving of fuel; from the age Flavian existed a real glass broke as is also demonstrated by the load found in some wrecks, such as those of Grado (second century A.D.) and Serçe Limani, on the southern coast of Turkey (XI century trade). In Rome they were opened workshops for glass processing as evidenced by the glass furnace found in the Crypta Balbi in the middle of Campus Martius.
The practice of recycling the glass was so widespread that archaeologists regard it one of the reasons for the limited number of recoveries of glass objects and in fact, the ones that you can see today come mostly from grave goods as well as from Pompeii and Herculaneum where ash of Vesuvius has crystallized the daily life.