The prophecy of Colosseum 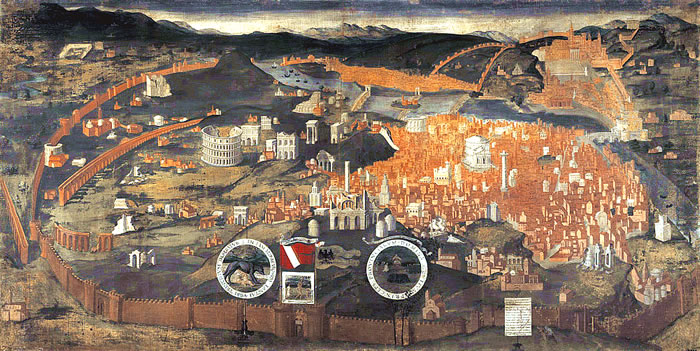 In the eighth century, in a Benedictine monastery in Sunderland, the monk Beda the Venerable then Doctor of the Catholic Church, in addition to writing ecclesiastical books and scientific treatises, rearranging texts of classical Latin authors, collected and reported the stories and prophecies of his time in the book "Collectanea" which reports the following obscure prophecy:

The Venerable Bede had not been in Rome and he never went there, what he had given resonance he founded already written. But what was true in what he had written and why an enlightened mind like his, which already in the eighth century stated that "the Earth is round like a game ball", gave resonance to such a prophecy?
Surely in a contradictory period like the Middle Ages there must have been a misunderstanding, an exchange. In the sixth century Rome was reduced to a small city and its resources were few, so its ruins became splendid quarries; the marbles were reduced to lime, the bricks dismantled and reused and the bronze melted. The great bronze colossus near the Flavian Amphitheater which had represented first Nero, then Apollo, then Hadrian, then again Apollo was surely fused.
The prophecy was certainly earlier and referred to the colussus because it represented the greatness and fortune of Rome, that was mingled with one of the world and of Eternity itself ( Cagè).
In the Middle Ages the memory of what was the large roundish building that was standing in the valley between the Esquiline, Palatine and Celio hills, near the colossus, was lost. The monument is mentioned for the first time in a chronicle of 1061, refound in the Archive of Santa Maria Nova, which defines it Amphiteatrum Colosei and when it is described in the Mirabilia Urbis Romae - a guide for pilgrims of the Middle Ages – is the Templum Solis in which was the bronze colossus.
Since then the Flavian Amphitheater has been called Colosseum; but from the colossus he not only took the name but also inherited the prophecy that binds to his fall the end of the world.
But why the Colosseum was seen as a magical and mysterious place for a long time?
Unlike many other buildings of ancient Rome, it was not interested in renewal, as was the case for the Pantheon (transformed into the church of S. Maria ad Martyres), the Temple of Antoninus and Faustina (that became Church of S. Lorenzo in Miranda ), the Temple of Peace (of which one part became Basilica of Ss. Cosmas and Damian) and so on.
The Colosseum has maintained its ancient and pagan air, which justified the birth around it of a whole series of legends, which were then fed by medieval beliefs and later by episodes of witchcraft by Counter-reform.