The Prisons of Ancient Rome 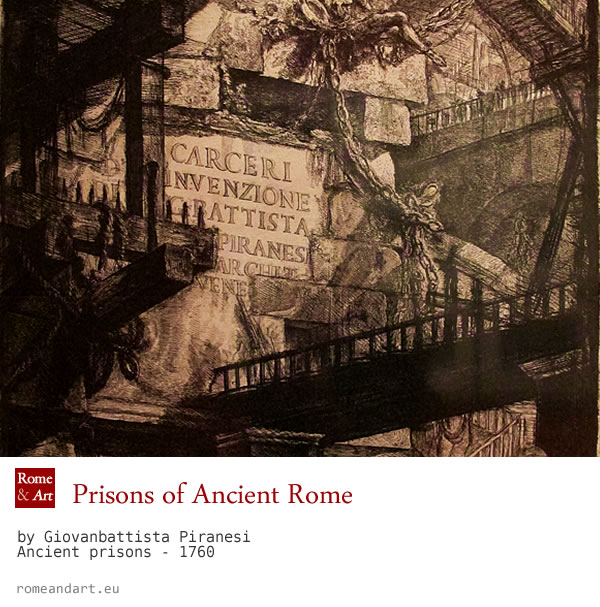 In ancient Rome, the prison was not a penalty in itself, but served to guard the guilty of a crime awaiting lawsuit and sentenced to capital punishment or other corporal punishment according to the "ius talioni", the law of retaliation.
In the Republican age the sentences were carried out immediately, then during the empire the sentences began to be less rigid and the more complicated procedures for which it happened that a lot of time passed between the sentence and the execution.
The legend that must be immediately debunked is that in Rome there was only one prison, the Tullianum, also known as the Mamertine Prison; just think hard to realize that a city that came to have about two million inhabitants had to have a good number of people who caused damage to people and property of others and also in the basilicas were held processes regularly. The Forum already in the Republican era there were two basilicas, the emperors then built other basilicas and even in the Campus Martius were other basilicas: the processes were many but where these guilties were kept, all ones in Tullianum?
The confirmation of the existence of other public prisons is also given by a piece of Ulpiano that shows a rescript of the Emperor Hadrian, when he was dealing with formalizing the regulations for the management of prisoners; the note in particular concerned the "pannicularia", or the management of the personal effects that the prisoners had with them during their imprisonment. The script of Hadrian refers to goods of clarifying prisoners also that "Speculatores" and "Optiones", who were the militiamen entrusted with the supervision of prisoners, could not take possession of these goods because these were to be used as a donation to the soldiers or to form the pay of the jailers themselves. These and other rules had to be applied by the "commentarienses", the officials who were entrusted with the tasks in the management of the processes that went from the care of the documents and trial files to the management of the prisoners with duties of the prison police. The need to create rules on prison management appears excessive for only one prison and as small as the Tullianum.
The Tullianum or Mamertine Prison was the prison for the guilty of crimes against the state, crimes of lese majesty and for the enemies of Rome. Just remember the names of the characters who were locked up: Pontius King of the Samnites (responsible for the serious outrage of the Caudine Forks) in 200 BC, Jugurtha king of Numidia in 104 BC, who was made to die of starvation; Lentulus and Cethegus the accomplices of Catiline in 60 BC, Vercingetorix, chief of the Gauls in 49 BC he was beheaded, Seiano the powerful chief of the Praetorian praetorians also him beheaded in 31 AD. Instead Peter and Paul were no imprisoned there, en fact the history of their imprisonment in the Mamertine Prison is a medieval legend, but today the prison is remembered as their prison and anecdotes are very many.
The Tullianum is located in the belly of the Capitoline Hill and was made using the tuff quarries that already existed in the early Iron Age, X and IX century BC ; it was a series of tunnels (lautumiae) dug into the hill but in which you could accommodate a small number of guilty and / or convicted. According to legend, the prison was built by Ancus Marcius and the name Tullianum derives from a pool of water, in Latin "tullus", which emerged inside the quarries ...