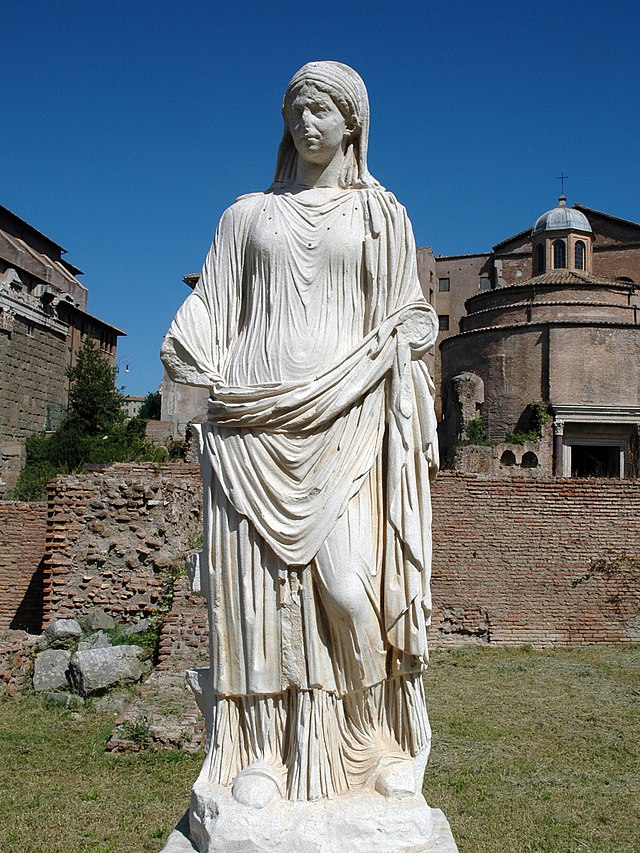 The Roman people since archaic times held in great consideration all the forces with which nature imposed itself and which the gods taught them to use and first of all the fire which, if in its most violent and wild expression was represented by Volcan, as heat that favors life was represented by Vesta.
The cult of Vesta has its roots in the myth. In protohistoric times the guardian of the fire was Caca, the sister of the titan killed by Hercules and if the brother represented the wild and destructive aspect of the fire, she was the beneficial semblant of the fire and had an aedicula dedicated to her inside the Temple by Vesta.
But all the peoples who contributed to populating Rome had their own Temple dedicated to Vesta because the cult, in the best known form, places the divinity among the sacred principia populi Romani Quiritium brought together with the Penates and the Palladium by Aeneas fleeing from Troy ; a sanctuary in Lavinio was dedicated to her where according to the myth the hero landed and here, once a year the highest Roman magistrates went together with the College of the Pontiffs to celebrate sacrifices.
The care of the sacred fire was entrusted from the beginning to priestesses, the Vestals, who had to be virgins and also in spirit as in body. The institution of the college of the Vestal Virgins has been attributed to King Numa Pompilius, however it has even more ancient origins and was part of the religiosity of the ancient Latin peoples, in fact already in Albalonga there were the Vestal Virgins and a vestal, Rea Silvia, was the mother of the twins Romulus and Remus. The myth of Rhea Silvia indicates that the institute is one of the most ancient and proper of the Latin peoples since at least the 9th century BC.
In the early Iron Age, the female role was institutionalized for the first time by creating a colegium, a representation of the archetype to which the social functions of the woman who is the custodian of the home and mother are entrusted and the vestal dress is proof of this.
The vestals were dressed like the brides of archaic times with the suffibulum veli stopped by fibulae when they were to officiate or attend sacrifices; with the overcoming of archaic society, starting from the fifth century BC they represented the archetype of the woman keeper of the home hearth. The vestal dress took up another element of the wedding dress, the veil whose symbolic meaning was purification and penance; the flammeum in the brides testified modesty and honesty and was red in color but for the vestals it also testified chastity and therefore was white in color.
Has handed down by Aulus Gellious, their exact denomination was Sacerdotes Vestales and, like the Flamen Dialis to which the edictum perpetuum of the urban praetor attached them, they could not swear an oath as they were considered as a simulacrum of the goddess.
Initially, the vestals were four then they were increased to six and the number did not change until the dissolution of the college in the fifth century AD; six was the number of the Vestals who alternated in the care of the fire but, in the house, they could have been higher because there were also the novices and the elderly ones who had decided to stay even if they had finished their service.
The life of a vestal began with the ritual of captio virginis; it was the ceremony by which the Pontiff Maximus chose a new Vestal that had to be virgin and, for this reason, she was chosen from twenty girls between the ages of six and ten years old, matrimae and patrimae, or belonging to patrician families whose parents had married with the rite of the confarreatio and that, moreover, they had to be still alive. However in the imperial age the patrician families did not willingly let their daughters become priestesses of Vesta and, for this reason Augustus decided that the choice was also open to the knights daughters.
One of the most significant moments of the rite was when the girl, dressed in the white priestly dress, got the haircut for once; the hair, the symbol of sacrifice, was hung on a tree, the ancient loto crinito.
At the end of a long ceremony with the formula

Pontifex Maximus accepted the girls under his power in taking away that of his pater familias. The vestals dedicated their lives to worship and the commitment lasted thirty years; during the first ten years they were novices who had to learn, the next ten were the priestesses to whom the worship activities were entrusted and in the last ten they had to teach the novices. After thirty years, the Vestal Virgins had fulfilled their task and were also free to marry, however many decided to remain in the collegium and were priestesses until the death.
At the head of the college was the Vestal Maxima, the oldest one, who had the task of coordinating the activities within the Collegium while the real leader was the Pontifex Maximus.
The tasks of the Vestal Virgins were simple and fundamental for Roman religiosity: ...