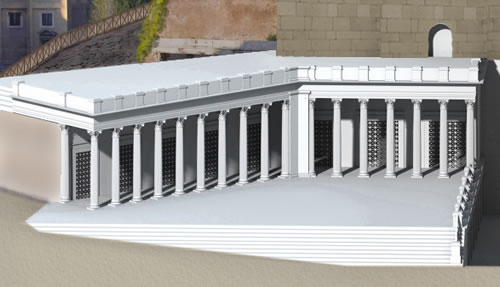 The Porticus Deorum Consentium was a sanctuary whose construction seems to date back to the IV-III century. B.C. and it was a building where a lectisternium took place, a ritual that consisted of a public banquet in which foods were offered to the gods represented by their statues.
The rite was of Greek origin and involved six couples of gods who were offered a ritual banquet. The offer to several deities at the same time was not new in Roman religion which already had the triads formed by Jupiter-Juno-Minerva, of Etruscan origin, and Ceres-Liber-Libera derived from archaic agrarian cults to which ritual libations were offered.
The offering of libations had different names according to the gender of the divinity; male deities were offered lectisternia, it was a banquets in which the simulacrum of the god was lying on a lectus, while, to female divinities were offered sellisternia where the simulacra were seated on a curulis sella.
Lectisternium was an expiatory and at the same time propitiatory rite that was celebrated only in the face of particularly negative events and not by chance the celebration was suggested by the Sibillini Books, which were consulted when prodigia had occurred.
The first Lectisternium was celebrated in 399 BC. as a saving rite, in order to avoid an epidemic that occurred during a very cold winter which was followed by a sultry summer; that rite lasted eight days, during which libations were offered to three couples of gods: Apollo and Latona, Hercules and Diana, Neptune and Mercury.
The rite also prescribed behaviors in which all citizens were involved as Livy says:
Opened the doors of the houses all over town and placed everything outdoors, available to anyone who wanted to use it, the foreigners were hosted, as reported, without distinction, known and unknown, and they talked in an affable and good-natured way even with enemies; abstained from disputes and quarrels; in those days, the chains were also removed from the prisoners, and scruple was made to chain again those to whom the gods had thus come to help.
The city in those days remained suspended in time recreating a mythical harmony. There were also who attempted a political exploitation of what happened: the plague was a prodigy that gods had sent to induce the city to reflect about some recent events, especially some changes that opened a position of power to plebs, a change frowned upon by the most conservative patricians . Livy explains the events as follows:
The speeches for the election of the military tribunes were already close, of which the patricians were concerned almost more than the war [against Veio], since they saw that the supreme power was not only shared with the plebs, but almost lost. Therefore, despite having arranged by common agreement for the candidacy the most illustrious characters, such as to give them the certainty that they would have been willing to reject it, nevertheless they, as if they were all candidates, resorting to every means, not only inconvenienced men, but also the gods … After contact with Greek culture, the pairs of gods became six and were made up of the main Olympian deities, which the Romans, however, coupled according to Sacrum Coniugium.
The lectisternium took place on six pulvinar in which the couples Jupiter and Juno, king and queen of the gods, Neptune and Minerva, Mars and Venus, one progenitor of the Ramnes tribes and the other mother of Aeneas, Apollo and Diana, were lying the gods of the Sun and Moon, Vulcan and Vesta, who supervise the fire, and finally Mercury and Ceres, both protectors of the economic elements of life, one of commerce, the other of agricultural production.
During the III century BC, several times the Senate ordered to consult the Sibillini Books and went on to celebrate five lectisternia; it is Livio who gives account of the number of times the tables were laid placandis habitumest deis, to appease the gods. In the III century BC the lectisternium was probably considered an ordinary ritual as the mentions of the annalists are rare, just about it had become a ritual that had to be celebrated periodically as the clavis annalis ...