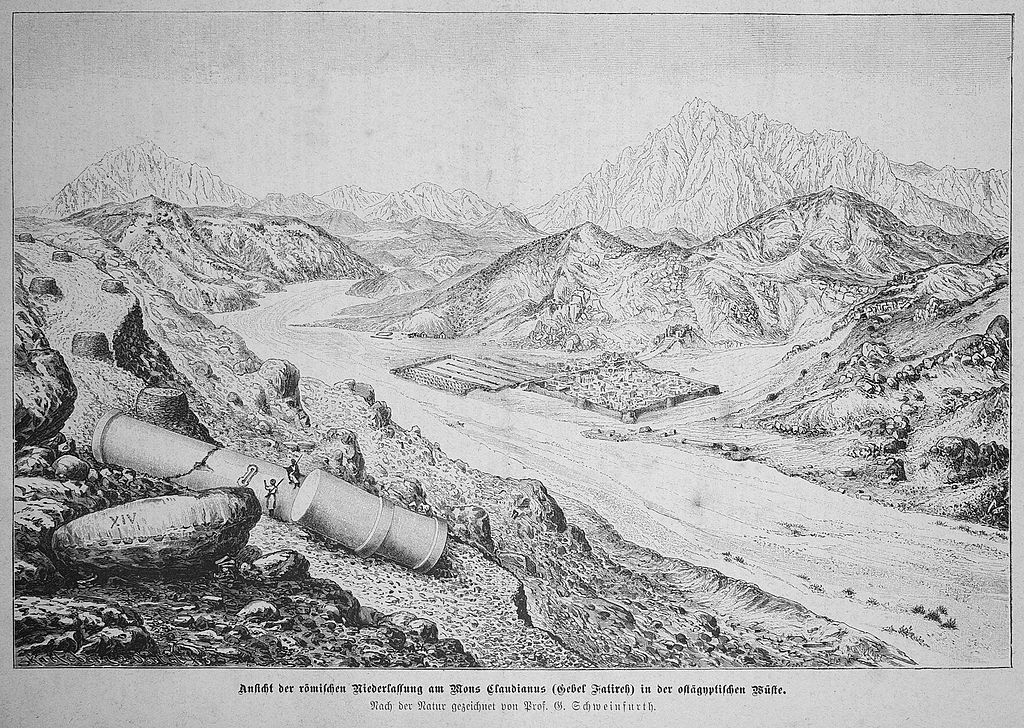 The Roman emperors had a preference for porphyry, the red marble that was extracted from Mons Porphyretes, from a quarry that was in the eastern Egyptian desert and the only one from which the purple porphyry was extracted.
The first Roman to be fascinated by the beauty of the porphyry was Julius Caesar who in the Alexandrian palace of Cleopatra had been able to admire the rooms where "solid and whole / masses of agate and porphyry stood". Cleopatra's porphyry was extracted in the quarries of Mons Porphyretes which became the personal property of the emperor when in 31 BC Augustus, after defeating Marcus Antonius and Cleopatra at Actium, decreed that the province of Egypt was of exclusive imperial property.
Not too far (50 km) from Mons Porphyretes there was also the Quarry Claudiana, from which granodiorite or trondhjemite,  types of rock similar in composition to granite, was extracted which was widely used starting from the first century. d. C.
Granodiorite columns are those of the Pantheon and the temple of Venus in Rome, but the material was also used for basins and floors.
The signs of the activity carried out in the quarries are still visible in the Mons Claudianus quarry after 2000 years; a testimony is the 18 m high column. and with a diameter of 2 m, which is estimated to weigh more than two hundred tons, and which obviously was not possible to transport. The quarries of Mons Porphyretes seem to have been abandoned in 451 AD.
The great fortune of porphyry occurred from the end of the first century. A.D. because Augustus did not want the spread of symbols of luxury and Tiberius was not interested in it; we must wait for Nero for a first relevant use of porphyry in the imperial residence.
With Vespasiano, to detach himself from Nero's luxury, understood as useless luxuria, there was a return to less precious stone materials. Even Pliny the Elder in his Naturalis Historia book XXXVI is against unnecessary luxury and denounces the violence done to nature by eroding the mountains. Pliny then deals with a topic that was much discussed already during the principality of Augustus, that is the contrast between foreign materials and Italic materials in metallic materials, but also especially in marble and which was right to use in respect of Roman ethics.
The contact with Hellenistic culture and art outclassed the Italian materials; wood and terracotta gave way to bronze and marble; the exploitation of the quarries passed completely under the control of the emperors who could also use contractors but nobody had as many slaves as they could employ. It was at the time of Tiberius that large blocks of marble from the east began to arrive in Rome, generally semi-finished which were then finished in Rome by Roman or more often Hellenic stonemasons who had brought their art to the capital of the Empire.
Porphyry statues such as the Apollo Citharist (now in the Archaeological Museum of Naples) and the headless statue of Togato on display inside the Curia Julia at the Roman Forum were created in this period ...