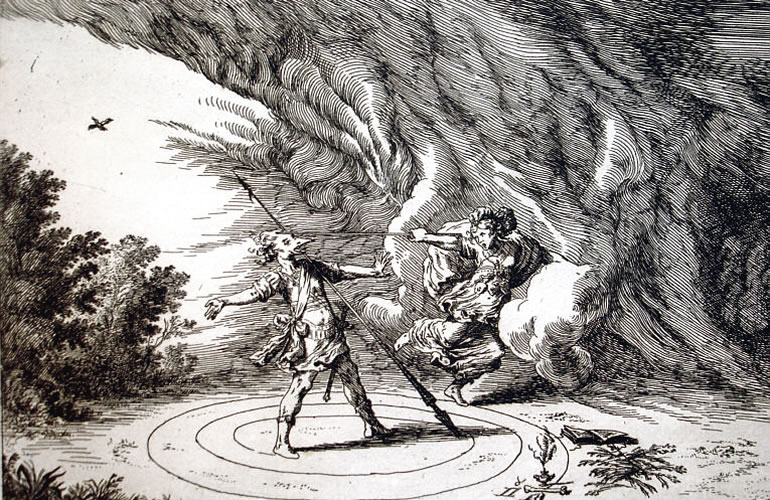 Pico was one of the kings of the archaic Latium, son of Saturn and Feronia, he founded the towns of Alba Longa and Laurentum and therefore it is an ancestor of the King Latino and of Romulus and Remus.
The myth describes him as a leader who loved hunting and married with Canens nymph; one day while he was in the woods with his men was seen by the Magician Circe that changed into a boar to be able to approach him. Picus to catch the animal walked away from the group but when he was in front of Circe she resumed hers form of woman and tried to seduce him; Picus rejected Circe who, angry with the king guilty of not wanting to love, turned him into a green woodpecker.
The Nymph Canens seeing that Picus didn't return went to look for him into the woods until, exhausted for searching, arrived on the Tiber bank gave a last song to love lost and dissipated in the air.
In the seventh book of the Aeneid, Virgil tells of the legend of Picus and how the Magician Circe turned it into a green woodpecker, one of the sacred bird of Rome, which then would help the wolf to breastfeed twins so it is often present in representations of Lupercal.
The Aeneid passage is still a source of a lot of information that are worth knowing; Virgil describes the temple of God Mamerte that stood high on a rock, and that had been the home of the Rex Picus, here it gathered the curia and the patres held the solemn banquets after ceremonies.

" ... In the vestibule in order ,arranged there are the effigies of the ancient fathers carved on cedar: Italus, Sabinus (first lover of slow vine with the curved grubs under the bust); and the old Saturn, and the statue of the god Janus, and the other kings Aborigines for their country in war, fighting, suffered wounds. At sacred doorposts were hanging weapons took in the war; curved axes, coconuts, crests of helmets, large ironmongery for doors, javelins, and shields and beaks briskly to the hulls. With quirinal lituus sat there, covered by a short trabea, Ficus, tamer of horses, and held with left hand, the curved ANCILE (sacred shield)"

Virgil lists all the gods of the ancient Italic peoples, describing the meetings of the patres, describes the spolia taken from the enemy and the lituus, identical to the one that Romulus will use to draw the boundaries of his Roma Quadrata.
But the myth of Pico is multifaceted, it seems to have more appearances and more lives. According to another interpretation of Pico legend was a demi-god who could change shape and preferred tthat one og bird sacred to Mars, the woodpecker; also he had prophetic powers and used them to give oracles at the altar of Mars, sitting on a wooden column.
These abilities seem to find evidence in the results of famous historians studies according to which on the pediment of the '' cave 'of the Apennine Sibyl there are letters and numbers (still partially visible) of an epigraph bustrophedic (the writing changes direction from row to line as following the movement of oxen plowing) in picena archaic language that brings the term "SIPILLA thei PIKI" or "SIBILLA oF GOD PICUS" ...