Pearls, empresses and the others 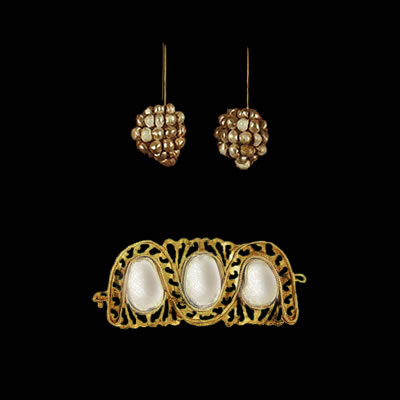 Pearls were much loved by the Romans and indeed one of the arcades that faced the central Via Sacra was called just Porticus Margaritarias and there had their tabernae the pearls traders.
Romans knew the pearl after the third century BC and called it "margarita", from the greek word "margariths", perhaps derived from the root 'marg-' (boldness, contempt of danger) which would indicate the courage of those who, to find the pearls, immersed himself in the deep sea.
The matrons aspired to own earrings, named crotalia (from the Latin crotalium or castanets, for reason of the sound the beads emitted by touching), formed with the greatest possible number of beads. But, above all, from the age of Augustus pearls they were used not only for jewelry but also to decorate clothes and boots.
The natural process of pearl formation - the growth of pearly layer around the nucleus formed by a foreign body penetrated in the oyster - was well known in ancient Rome, Pliny describes it in his Naturalis Historia (Book IX, 56) explaining that this it could only take place when there were storms at sea with thunder and lightning; these treasures contained in oysters were called by Pliny "phisemata". Just because they came from the sea often the pearls were mounted on jewelry they had stylized lines that reminded the waves.
An example is a diadem where three pearls exceptionally large are mounted; their color is defined cream-white-grayish by experts, the shape is oblong baroque and their dimensions are: 16.5 mm x 12-19 x13 - 19 x 12.
The craftsman made the diadem perforating a single gold plate to recreate the pattern of the waves and he setting in the pearls after having emptied the center and passed a golden thread to fix the bezel.
The pearls, although already known in Rome, began to flow in quantities in I century BC with large spoils of war; it is said that in the triumph celebrated by Pompey - for having eradicated the danger of pirates off the Mare Nostrum, defeated the Parthians, have created new provinces and moved the border of Rome more over to the east - on the wagons among many riches paraded also "... 33 pearl crowns, a chapel or a temple dedicated to the Muses formed of pearls with a sundial above; a portrait of Pompey made with pearls ...”.
Pearls became connotation also of belonging to a social class, in fact the lower classes could not afford to have them for the cost, but in I century B.C., during the Julius Caesar consulship, it was promulgated a law that prohibited the theirs use by the lower classes. Consistent with its position, Caesar to his lover of all life, Servilia, gave a pearl which cost 6 million sesterces -when a legionary was paid 900 sesterces a year -. They were a true symbol of ostentation of wealth and for this much blamed by philosophers, historians and some writers of the time reporting of madness of women for pearls, and jewelry in general, (Tacitus, Annals, III, 53) and who complain to their purchase big waste of money (Pliny, Natural History, XII, 84); as proof of this, in the Naturalis Historia, Pliny relate the legend of the challenge won by Cleopatra against Antony to show him that a queen as she could have served a lunch for 10 million sesterces.
The history over the centuries has affected many artists who have interpreted in the paintings the legend known as "Dinner of Antony and Cleopatra", the Queen of Egypt would win by melting in a glass with vinegar a pearl of her earring and then drink it. Even scientists are intrigued to legend, following the directions of Pliny, they repeated the experiment, and the pearl was dissolved - calcium carbonate of the pearl reacts with acetic acid of vinegar to produce calcium acetate, water and carbon dioxide - to demonstration that many ancient legends should be reconsidered as true.
But there are other legends about the pearls; pearls were beloved by the goddesses and a legend tells that being the pearls a dear gift to Venus, Julius Caesar did make a breastplate with pearls fished in England as a gift for Venus Genetrix statue in the temple he had built to her. The pearl was considered a fruit of love, and for this dear to Venus, goddess of love and fertility.
Women of Julia-Claudian dynasty and after them the other empresses up to Theodora used the pearls for jewelry and diadems; besides simple strings of pearls adorning her hair like that of younger Faustina that appears in a sestertius, there are others with richest decorations. The branches volute were much appreciated in Claudian and Hadrian (Sabina) age; appear palms, edges finished with pearls or with the opus interrasile formed by lotus flowers and palms also, as in the diadem of Antonia Minor from the nympheus of Baia. However all the Roman women loved pearls; the artisans made pins adorned with pearls with which the women of the less wealthy classes adorned their hair and who could, trying to get as a gift a “linea margaritarum”, what today is called "string of pearls."