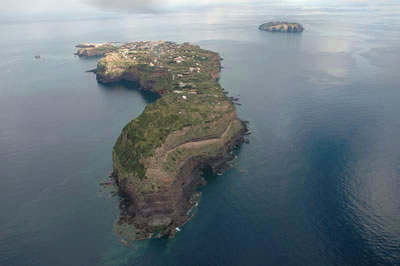 Ventotene is one of the Pontine islands, in the days of Ancient Rome his name was Pandataria. Very small, only 154 hectares, was chosen by the emperors of Rome as a place of exile for their family women considered immoral or dangerous.
The lex Iulia, enacted by Augustus in 18 BC in order to moralize Rome costumes was directed to contain "crimen adulteri" although in fact the crime was attributed only to women and the punishment could include death but it effects date was “relegatio ad insulam”.
Pandataria island became the island when they were relegated to matrons of important noble families, first of all the women of Julian-Claudian gens.
The first woman to be sent to Pandataria was Julia, the daughter of Augustus. She arrived on the island in 2 BC, accused of adultery and treason. The living conditions were uncomfortable: on the island, extended less than two square kilometers, were not allowed men, while any visitors had first to be authorized by Augustus himself; Julia was not allowed to drink wine, and every form of luxury.
Julia on the island was reached by her mother Scribonia which Augustus granted of being close to his daughter. For the stay of Julia Augustus had built a villa on the island's highest point, Punta Eolo; The villa was large enough and well equipped with swimming pools and a small theater.
To make possible the stay of Julia, Augustus endowed the island with all the infrastructure necessary for a small island: it was built a port that is a masterpiece of engineering machined from tufa, where even the cleats for mooring boats were excavated into the rock; They were made of the water tanks, and a fish pond which is now called Murenaio. It consisted of a series of marine basins excavated into the rock, which ensured constant supply of fresh fish to the inhabitants of the island. In this quadrilateral you can swim in a sort of archaeological pool, enjoying the absolute transparency water observing what remains of the Roman architectural ingenuity.
Another notable work of engineering was built in order to have fresh water in the absence of an original source on the island. For the collection process it is made recourse to tanks, mainly in the open air, in the central pavilion of the Villa and to two huge tanks excavated into the tuff; from the two tanks branched off a first conduit that reached the port area, while a second conduit reached the headland of Punta Eolo, until the spaces of the villa spa, a third duct reached the pavilion with fish pond and terrace above the villa.
After the Roman period, the tanks were no longer a source of water supply; cavities became natural shelters for the residents and goers of the island, early Christian and hermits first and then refuge of the few inhabitants from the incursions of the Saracens. Centuries later during Bourbonic colonization tanks became a prison for detainees involved in the construction of new Ventotene.
In the Villa of "Punta Eolo", Julia remained for fourteen years, in fact it was only in 12 A.D. Augustus consented to returning Julia in Italy but confined her in Reggio.
In Pandataria was also relegated the daughter of Julia, Agrippina the Elder, the widow of Germanicus, accused by Tiberius of insulting language and for this of lese majesty. Agrippina was relegated to Pandataria in 29 A.D. and suffered abuse so much that she ended up to starve in 33 d.C; her ashes were buried on the island. In 37 A.D. just become emperor, the son Caligula with a spectacular ceremony went to Pandataria to take the urn with the ashes of Agrippina which brought to Rome and made bury in the Mausoleum of the Julia gens ...